SpaceX and NASA are going on a joint mission to launch a spacecraft that would intently crash into an asteroid to change its course under the Double Asteroid Redirection Test or DART venture. Of course, the best reaction that the SpaceX CEO can give here is to create a meme and share it online, something about helping the dinosaurs.

SpaceX, NASA to Crash Spacecraft to Asteroid via DART 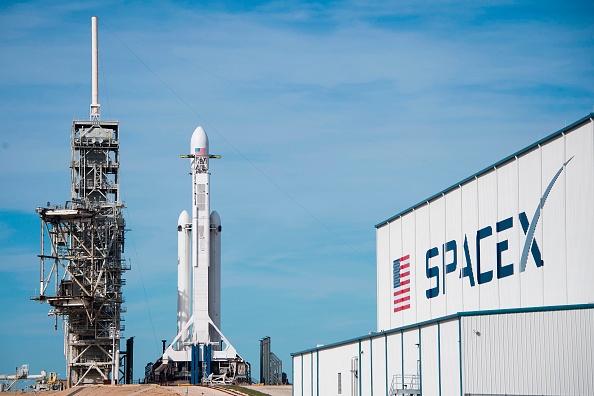 (Photo : Photo credit should read JIM WATSON/AFP via Getty Images)
The SpaceX Falcon Heavy rests on Pad 39A at the Kennedy Space Center in Florida, on February 5, 2018, ahead of its demonstration mission. - SpaceX is poised for the first test launch February 6 of its Falcon Heavy, which aims to become the world's most powerful rocket in operation, capable of ferrying people to the Moon or Mars some day. (Photo by JIM WATSON / AFP)

SpaceX and NASA are launching the Falcon 9 that brings a satellite bound on a collision course, focusing on redirecting an asteroid for its potential hazard that would be near the planet's area. NASA and SpaceX have already completed a static fire test earlier today, indicating the mission to be ready for the upcoming launch of DART.

According to SpaceX, NASA's DART targets a launch date by Tuesday, November 23, and would be happening in the night, by 10:21 PM Pacific Time.

The launch of DART in the coming week would determine if the mission would be successful in redirecting an asteroid, should there be an Earth-threatening space rock headed its way.

NASA will intentionally crash the DART spacecraft into an asteroid to see if that is an effective way to change its course, should an Earth-threatening asteroid be discovered in the future

The world is reacting with amazement and high praises for this project by SpaceX and NASA, but the private space company's CEO, Elon Musk has reacted to this venture with a meme. It seems like this is something that the CEO has created himself, talking about giving a warning to dinosaurs that an asteroid is coming, but they are too busy to notice it because they wear Airpods.

Good thing, there are agencies like NASA and SpaceX focusing on a DART mission to redirect the asteroid as a test for the future, to help these dinos.

SpaceX and NASA have long been partners to bring innovative projects and perform its missions that have mostly been successful, being well-praised and received by the public. It is known that NASA's Commercial Crew has been fulfilled by SpaceX three times already, bringing three batches of astronauts towards the ISS aboard the Dragon.

The company has been highly regarded as one of the most successful space agencies that are focused on bringing innovation now, especially with the company's goals to bring the first humans to Mars. SpaceX and NASA have been focusing on different projects, with a supposed Lunar Lander contract that has now been canceled after initial disputes.

Nevertheless, the company has a new venture with the national space agency, and it aims to redirect an asteroid in the process.