Astronomers revealed that ESO's VLT or European Southern Observatory's Very Large Telescope found the closest pair of supermassive black holes to Earth we have ever observed. 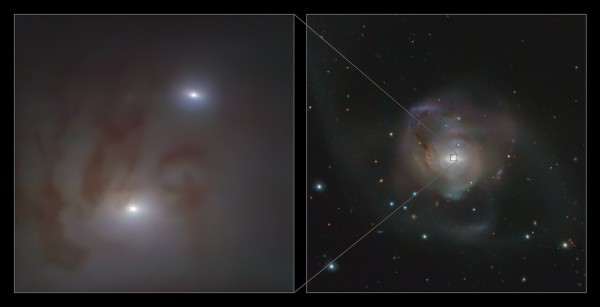 Together with her team, astronomer Voggel first detected the masses of two objects in space by analyzing how the gravitational pull of the black holes affected the movement of the stars around them.

Located at the core of NGC 7727; a galaxy located 8 million light-years away from Earth situated at the constellation Aquarius, the bigger black hole was found to have a mass of almost 154 million times of the Sun. Meanwhile, the smaller companion is 6.3 million times the solar masses.

Astronomers were astonished to find a pair of supermassive black holes, witnessing firsthand masses as big as their discovery. The feat became possible due to the close proximity of the NGC 7727 to Earth, and the detailed observations obtained at Chile's Paranal Observatory using the Multi-Unit Spectroscopic Explorer or MUSE on ESO's VLT.

ESO's VLT is one of Voggel's learned instruments during her time as a student at European Southern Observatory. Voggel and the rest of her team measured the masses with MUSE, alongside additional data from the Hubble Space Telescope provided by NASA/ESA.

The instruments confirmed that the observed objects in the system NGC 7727 were indeed a pair of supermassive black holes.

At first, astronomers suspect that the two black holes are hosted by the said galaxy system. However, they were only able to confirm the presence until now. The reason was they failed to see large amounts of high-energy radiation from the immediate surroundings, which was considered a dead giveaway.

"Our finding implies that there might be many more of these relics of galaxy mergers out there and they may contain many hidden massive black holes that still wait to be found," says Voggel.

Vogel added, "It could increase the total number of supermassive black holes known in the local Universe by 30 percent."

What The Discovery Of Supermassive Black Holes Mean For ESO

European Southern Observatory has been searching for hidden massive black holes. This recent discovery is a great leap forward for their new ELT or Extremely Large Telescope, which is set to operate later this decade in the Atacama Desert in Chile.

Co-author, ESO astronomer, and the head of ESO Paranal Science Operations Steffen Mieske says, "This detection of a supermassive black hole pair is just the beginning."

"With the HARMONI instrument on the ELT we will be able to make detections like this considerably further than currently possible. ESO's ELT will be integral to understanding these objects," Steffen added.

Needless to say, there are roaming black holes around, some of them might even be closer to Earth. Astronomers just needed the instrument to detect these objects in space.