MARVEL Future Revolution, the latest collaboration between Netmarble Corp. and Marvel Entertainment, and Marvel's first open-world action RPG on mobile platforms, has been recognized as the 'iPad Game of the Year' in Apple's App Store Awards 2021. 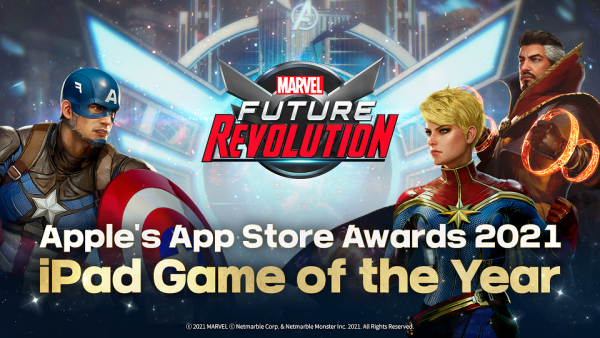 "To be recognized with this prestigious award is immensely humbling, as we really strove to make a first-of-its-kind game for Marvel that connected players from all over the world. We were up against apps and games judged on delivering exceptional quality, cutting-edge design and intuitive usability, as well as advanced application of Apple's unique technologies, making this especially rewarding," said Joe Lee, Executive Producer at Netmarble. "Thanks to our talented team of developers, our highly collaborative relationship with Marvel, and the long hours put in by our entire team at Netmarble, we were able to bring our shared vision to life. We can't wait to show you what's in store for MARVEL Future Revolution in 2022."

Netmarble and Marvel recently showcased a first look at Magik, MARVEL Future Revolution's upcoming ninth playable Super Hero, officially revealing that her world premiere would be on December 15, 2021. More details on this new character and other upcoming content will be announced in the near future.

Since launching globally in August 2021, MARVEL Future Revolution has been recognized by Apple as the 2021 'iPad Game of the Year,' by Google Play as the 'Best Competitive Game' of 2021, and by The Game Awards - receiving a nomination for 'Best Mobile Game' in 2021.

Marvel Mightys NFT to be Sold via VeVe and Marvel, Featuring the 'Captain America' Collection