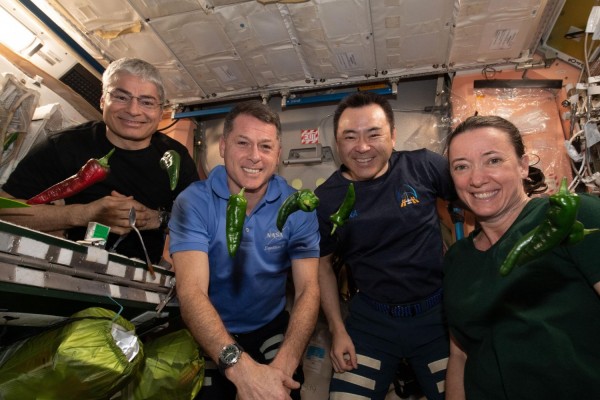 Astronauts from NASA's Expedition 66 aboard the International Space Station spiced up their diets on Oct. 29.

The chile peppers onboard have been growing since July 12.

On Oct. 29, they finally ate the space-grown peppers.

Researchers selected these upgraded chile pepper because they are an excellent source of Vitamin C. But most importantly, they perform best in ground tests.

This year, the first of the two harvests was in October, and the second was planned for late November.

The first was when it became the most extended experiment to ever take place on the International Space Station (ISS), while the second was when it broke the record for feeding the most astronauts from a crop that had been grown and harvested in space.

Interestingly, the chile pepper experiment that broke two world records that have been recorded recently was not the first time it appeared, according to the ISS crew.

The crew said they used the chile pepper in tacos, along with vegetables and fajita beef. Taco was also the most popular meal enjoyed by the astronauts, following the harvest of the chile peppers.

Reportedly, there has been a 17-day extension for the experiment on the station.

Romeyn explained that they expected the peppers to grow in a span of 120 days.

However, they ended up growing it for 137--the longest experiment in space, which was one of the world records they achieved. The former titleholder was the 'zinnia flowers' grown for 90 days in space during the 2016 experiment.

Following the success of the plant experiment, NASA announced that the next crop the team residing Kennedy Space Center plans include growing dwarf tomatoes and testing new types of green leafy vegetables.

Romeyn remains ecstatic about the result of their experiment and hopes to grow more crops in space.

"We went into this experiment knowing it wouldn't be easy to grow peppers in microgravity, but this experiment was a wildly successful demonstration that we're on the right path for space crop production," Romeyn said.

The main goal behind this set of experiments is to create a sustainable crop production for future long-duration missions to the moon and eventually Mars, he stated.

Related Article: NASA's TESS Helps with the Discovery of a Rocky Exoplanet That Completes One Orbit in 7.7 Hours