The SpaceX Starship mission to Mars is yet to come, and Elon Musk, like the rest of the world, is still waiting on regulatory bodies and their decision to give a license to the company. However, that does not stop the CEO from posting videos of the different accompaniments of the Starship on its future flights, especially with its Launch and Catch Tower.

SpaceX Starship: Launch and Catch Tower is Awaiting the Spacecraft 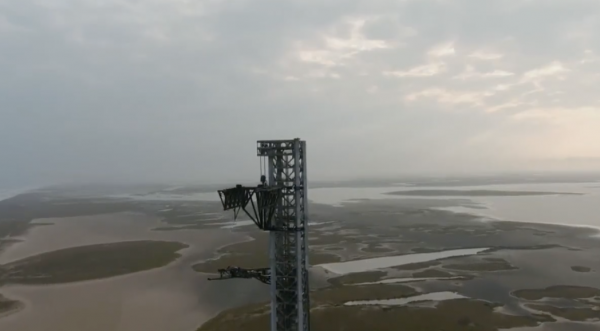 The mission schedule remains unknown, especially as the FAA did not yet release any details regarding the approval of the license that the company needs for its tests and the like.

SpaceX is only awaiting the go-signal of the environmental assessment of the regulatory body for its upcoming launch, aiming to test the Starship's capabilities for a launch and land maneuver.

SpaceX: Starship Missions and Others this 2022

Apart from the Starship testing after getting its required license, SpaceX still has a lot to launch this year, especially as it plans to beat its previous record in the number of missions for 2021. Starlink and Commercial Crew flights are still coming, and other launches are in partnership with private companies and other nations.

It will be a busy 2022 for SpaceX, especially if Starship gets the green light.

The Starship is one of the most advanced spacecraft in the human race, and it is because it uses the latest Raptor 2 engines, its Stainless Steel body that is intended for a rusty place, and its capabilities that opens up the world to multi-planetary ventures.

Truly, the Starship is a next-generation rocket from SpaceX that still awaits its permit to conduct its launches and test its capabilities.

SpaceX is planning a "Launch, Land, Repeat" observation with the Starship, and it highly resembles the missions of the Falcon and Dragon spacecraft that are reusable vessels too. The Musk-owned company is among the pioneers of reusable spacecraft technology, and in our current generation, it is a massive need as resources are scarce.

The world is evolving and this is something that SpaceX helped in its changes, especially with the way humans see space travel and interstellar adventures. Now, it is achievable and available for all, making humans have stakes in anything about the cosmic environment, with one of the most sought-after planets, Mars.

Related Article: SpaceX Contributes to World Record of Most Rocket Launches in 2021, Elon Musk Wants THIS to be the Metric