Shazam Google Chrome: How to Use Extension with Headphones On, Identify with Continuous Streaming

Apple's Shazam is now available on Google Chrome as an extension, and this helps in identifying a song using one device only, not needing to point one's machine on a PC's speaker always. The new extension comes with perks, too, primarily as it can determine a song despite having the headphones on and not removing them for any recognition. 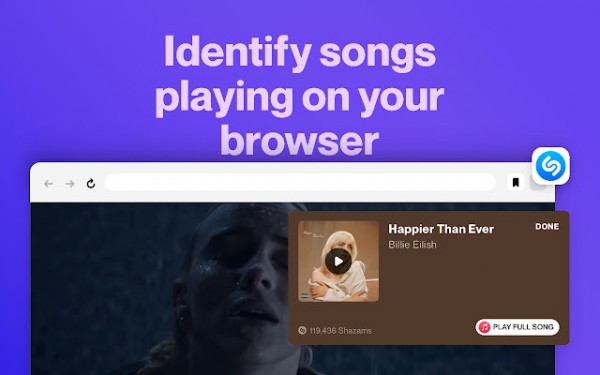 Shazam is now available on Google Chrome as an extension, and the feature could not get any more accessible than this, especially as it comes right at the browser for use. The feature can be accessed at the browser's menu bar, and users can use it by accessing the extension to work when they want to know the details of the specific audio.

Apple said that people could use Shazam by tapping the logo and playing music that needs identification.

The Google Chrome extension for Shazam is free to download and install, also comes as a free app once it is available on the browser.

Shazam also saves the music identified for a person, to which it can connect to the Apple Music and add it to their library, from their discretion.

Read Also: Chrome 97 Can Now be Downloaded, Here are the New Features to Look Forward To

Like the Shazam on smartphone devices, users need to tap the extension and toggle it by tapping the logo. After that, play the music that needs recognition for the app to work. The new browser extension is a treat as people do not have to remove their headphones on and turn up the volume for Shazam to hear.

The extension can hear songs from the internal speakers of the device.

Back in 2018, Apple made a massive purchase on the acquisition of the audio tool, Shazam, for $400 million that gave the Cupertino giant the rights and operating license to it. Moreover, one of Apple's tweaks was to make it ad-free, which is a massive step for Apple.

The app remains free and ad-free to this day.

No other applications came close to Shazam and its excellent voice-determining and voice-searching artificial intelligence that matches the song to its rightful name, actor, year, and other factors. Moreover, what is important now is that Apple brings the "ShazamKit" for everyone to use, and it focuses more on the beats and hums that a person can create to identify said music.

The Android operating systems may already access Shazam on the platform, giving people a lot of tools to help in identifying a certain beat or music from the mind or media. Its arrival to Google Chrome as an extension also helps make the app more accessible for people and avoid needing multiple devices to access its use.