NASA InSight Lander Goes into Safe Mode After Dust Storms on Mars; Will it be Decommissioned Soon?

NASA's InSight Lander went into safe mode over the past week, and it is because of a dust storm on Mars, effectively pushed the spacecraft to conserve its power as its solar arrays got blocked by the occurrence. The lander's danger in the dust storm may cause the device to be decommissioned if it drains its batteries, but it survived the event.

NASA InSight Lander: Safe Mode in the Past Week 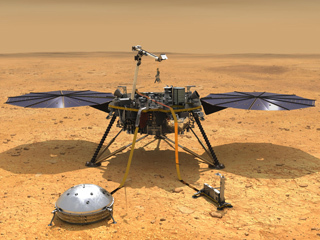 NASA's InSight Lander got caught in a dust storm on Mars, and the spacecraft stood there amidst the devastating storm, forcing it to go into safe mode and not have any contact with the agency. The safe way began last Friday, June 7.

However, fast forward to almost four days later, the dust settled and cleared, with the InSight lander already establishing communications to the space agency for its report. The InSight is currently updating NASA regarding its health condition on the Red Planet and is recharging its power cells from the power of the Sun.

The NASA InSight Lander is now stable, but the team found it relying on low energy near its power cells' depletion. Draining the batteries on the lander may be fatal to its condition, as it would need a hardwire to charge it again, to which no assistance will be provided to it.

InSight's panel got covered in dust, and it may contribute to blocking the solar panels from charging the lander. Good thing that NASA already made tweaks to it, with a way to shake off the dust and continue its operations.

NASA InSight Lander's Contributions in the Past; Will It be Decommissioned?

The InSight lander proved a lot to the world, and that is its study of the Red Planet that let the public know a lot of advancements on one of our neighbors in the Solar System. The lander also digs the Martian surface to collect samples and get to see the landscape of the planet, especially as its primary purpose is to study Mars.

One of its most popular studies includes discovering Mars having quakes and tremors that shake the planet and specific parts of Mars. Initially, people thought of Mars as a lifeless terrestrial planet. Still, in reality, it is a living planet like ours, with current research now looking into it as a possible colony or destination.

Stories of the InSight Lander to soon be out of work and decommissioned in the Red Planet is not entirely accurate now, especially as it has more to do and bring for NASA. The dust storm may be dangerous for the spacecraft, but it has already passed, and events following it show that InSight is still in the game to bring more information regarding Mars for humans.