Amid several problems, NASA was able to complete its deployment for the James Webb Space Telescope on Saturday, Jan. 8. After many years of undergoing issues and costing over $10 billion taxpayer funds, the huge space observatory has finally flown without any interruptions. 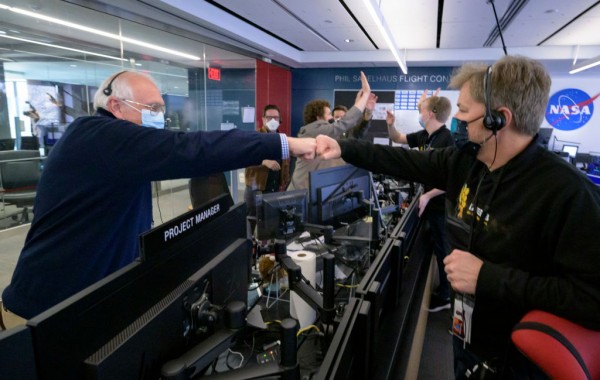 (Photo : Bill Ingalls/NASA via Getty Images)
BALTIMORE, MD - JANUARY 08: NASA James Webb Space Telescope Project Manager Bill Ochs, left, NASA James Webb Space Telescope Commissioning Manager John Durning, right and others from the operations team celebrate after confirming that the observatory' s final primary mirror wing successfully extended and locked into place at the Space Telescope Science Institute on January 8, 2022 in Baltimore, Maryland. With Webbs 21.3-foot (6.5-meter) primary mirror fully deployed, the infrared observatory has completed its unprecedented process of unfolding in space to prepare for science operations. The observatory will study every phase of cosmic history from within our solar system to the most distant observable galaxies in the early universe.

According to Ars Technica, NASA teamed up with ESA and CSA to deploy the next-gen space telescope which would uncover the secrets of the universe. The researchers believed that this deep-space observatory would discover the first worlds and space entities that existed billions of years ago.

While people could not know the amount of effort that the team put into this deployment, the tech site wrote that NASA considered this as a huge accomplishment. Per the agency's chief of science, Thomas Zurbuchen, it was an amazing milestone for the whole group.

Before the creation of this space telescope began, scientists have been finding ways to build a telescope that would succeed the old Hubble Space Telescope. With that, the researchers came up with an observatory that would make use of the infrared spectrum.

The experts said that this particular part of the spectrum is ideal for identifying heat emissions from a cosmic body. In addition, it is longer compared to other wavelengths so there's only a very small chance of being deflected by planetary dust.

Of course, launching a huge telescope to space without considering obstacles might harm the project after some time. The scientists should take note that it could withstand the harsh sunlight coming from the sun.

This is the reason why NASA came up with a heat shield that resembles the size of a tennis court. It took a lot of time before the space agency created his protective addition for the telescope.

Before its deployment, the telescope faced another delay until Christmas eve, as per Tech Times' report back in December.

The team noticed that a myriad of single-point failures could happen which is why it tested the heat shield many times before attaching it to the Webb Space telescope.

Once NASA finished the testing with the shield, the team concluded that the part of the telescope which faces the sun reached 55 degrees Celsius. This was compared to the usual temperature of the Sahara desert during a hot season.

Despite its successful deployment, NASA will continue evaluating its parts to see if they are working after the launch. Several instruments used in the program will be recalibrated as well.

In another report from CNET, NASA captured an image of the observatory that passes along with the (35452) 1998 DF10 asteroid.

Elsewhere, the recent report revealed that cats flocked on the dish of SpaceX's Starlink satellite. Despite the snowy terrain, the felines stacked up in it to generate heat from each other. However, the article said that the "Snow Melt Mode" feature could be the reason why the cats swarmed over the satellite's dish.