Taiwanese electric scooter manufacturer Gogoro recently said it was gunning to launch a myriad of GoStations at the end of 2022.

According to the report, the number of gas stations in the island nation is projected to be surpassed by battery-swapping stations soon. 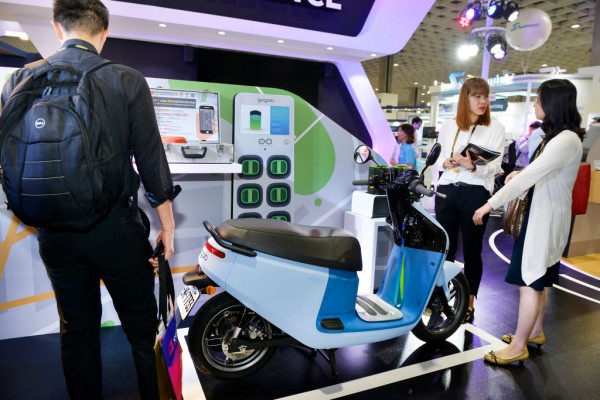 (Photo : CHRIS STOWERS/AFP via Getty Images)
People look at a Taiwan-produced Gogoro electric scooter during Computex at Nangang exhibition centre in Taipei on May 28, 2019.

According to Electrek's report on Wednesday, Jan. 12, many electric scooter users in Taiwan have been quickly shifting their depleted batteries in exchange for a fully-charged one. The move is part of Gogoro's subscription service, which allows riders to swap batteries in a matter of seconds.

The Taiwanese firm is eyeing an expansion of battery-swapping stations this year. That is why it expects that GoStations will be widespread in the country in the long run. They are expected to outnumber the gas stations in the next few months.

In another report from Taipei Times, Gogoro rolled out 2,215 GoStations across the country in 2021. At that time, the number of gas stations was slightly higher at 2,487.

Over the past year, Gogoro has been improving its electric vehicles, including motorcycles. The company anticipates that its vehicles will dominate the roads and the cities one day following its two-wheeler expansion.

"By the end of this year, we are very confident that the number of battery swapping stations will surpass the number of gas stations nationwide," Alan Pan, Gogoro VP for energy services, said in a conference.

To swap electric batteries, Gogoro riders could go to the nearest 7-Eleven stores where the GoStations are located. At the moment, there's another one that is situated on Taiwan's highest highway Hehuanshan. It can be found in Wuling, Nantou County.

Electrek wrote in the same report that Gogoro has recently joined with prominent two-wheel electric vehicle producers DCJ and Yadea as part of the three-way partnership. The Taiwanese company plans to invade the Chinese market this time.

Before its recent collaboration with two scooter makers, Gogoro partnered with Foxconn to produce swappable batteries and electric scooters.

In November, the company decided to infiltrate the Indonesian market through its partnership with Gojek. Since then, Gogoro continuously expanded its service across Asia to put Taiwan on zenith when it comes to two-wheeled EVs.

Gogoro to be Nasdaq-listed

According to the company's representative, Gogoro scooters and motorcycles comprised 28% of EVs sold in Taipei in December 2021. This yielded big sales for the firm that month.

Following its success in Taiwan, Gogoro eyes entering Nasdaq listing through an agreement with SPAC. It is expected that the deal will be finalized in Q1 2022.

Elsewhere, Tech Times reported that Buggati released its first EV in the form of an electric scooter. The venture was made possible with Bytech International.

According to the source, the electric scooter has a speed of 30 km/h or 18.6 mph. It runs using its 700W motor. The two-wheeled vehicle is magnesium alloy-made and aerodynamic, according to the company.

Read Also: GoTrax EBE2 Electric Bike Can Run at 50 Miles With Pedal Assist--Why is it So Special?