How To Play Pokemon Trading Card Game: Here Are The Basics

Pokemon has its roots deeply embedded in video games and anime, and it has been around long enough to establish itself as a pop culture icon. One of the offshoots of its popularity is the Pokemon Trading Card Game, which is still alive and kicking even after almost two decades in the collectible card game scene.

For fans of the series, the Pokemon TCG is a great way to put on their trainer hats and battle it out with friends. Even people who are simply familiar with Pokemon, and perhaps those who know barely anything about the franchise, could also enjoy the strategic gameplay of Pokemon TCG.

For Pokemon fans and non-fans alike, here is a basic guide on how to play Pokemon TCG.

In Pokemon TCG, players take on the roles of Pokemon trainers, with their 60-card decks made up of Pokemon cards, Trainer cards and Energy cards (more on this later). Players can battle with a maximum of six Pokemons at a time, with the player evolving and switching out the Pokemon and using them to exploit elemental weaknesses, much like in the video games.

There are three card types in Pokemon TCG, as previously mentioned. Players will have to use them to their best effect to gain advantages in battles.

The Pokemon cards are the most important cards for a player, with players building their decks with Pokemon that they believe would have great synergy with each other. Up to four copies of a Pokemon card with the same name can be used in a deck.

Trainer cards provide support for the player through a variety of effects which will either benefit the player or harm the opponent. Similar to Pokemon cards, up to four copies of a Trainer card can be used in a deck.

The parts of Pokemon cards and Trainer cards are as follows: 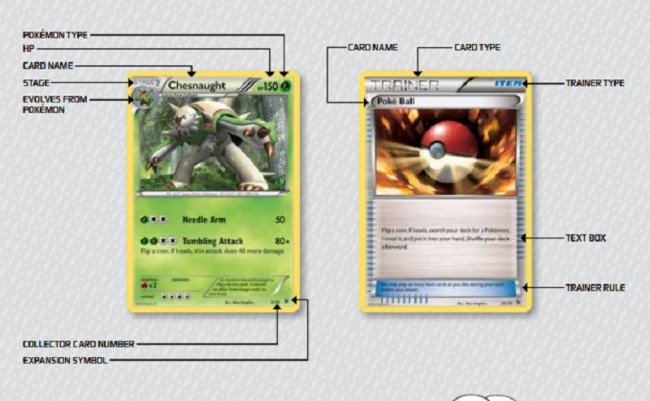 Energy cards are the ones that fuel the actions of the player's Pokemon. Players can attach one Energy card per turn to their Pokemon, and choosing which Energy card to attach to which Pokemon is one of the most critical decisions to be made in the game.

There are 11 Energy types in Pokemon TCG namely Grass, Fire, Water, Lightning, Psychic, Fighting, Darkness, Metal, Fairy, Dragon and Colorless. There are also Basic Energy cards and Special Energy cards, which have additional effects on top of attaching Energy to the Pokemon.

Name: The name of a Pokemon card determines how many of these cards you can play in a deck. Even if two cards have completely different abilities but have the same name, they will count as two copies for that Pokemon card.

Hit Points (HP): This signifies the amount of damage that a Pokemon card can endure before it is knocked out. Damage on a Pokemon is represented as physical counters placed on the card, with each counter standing for 10 points of damage.

Pokemon Type: The symbol indicated for the Pokemon card's type determines any bonuses that certain types of Pokemon receive as well as damage modifications caused by weaknesses and resistance. There is no limit on how many types of Pokemon can be used in a deck, but since Pokemon cards can only use their abilities if the player draws and attaches the proper Energy card, it is best to limit decks to contain two or three types of Pokemon.

There are four types of Trainer cards namely Items, Tools, Stadiums and Supporters.

Items are the most basic form of Trainer cards, with players able to play as many of these cards on their turn as they want. Tools are a kind of Item card that can be attached to Pokemon cards to give them certain effects, with Pokemon only able to have one Tool attached. Stadiums represent battle areas and provide effects that affect both players, but only one can be in play at a time – playing a Stadium card while one is already in play discards the previous Stadium card. Supporters are deemed the most powerful Trainer cards, but players may only play one Supporter card per turn. 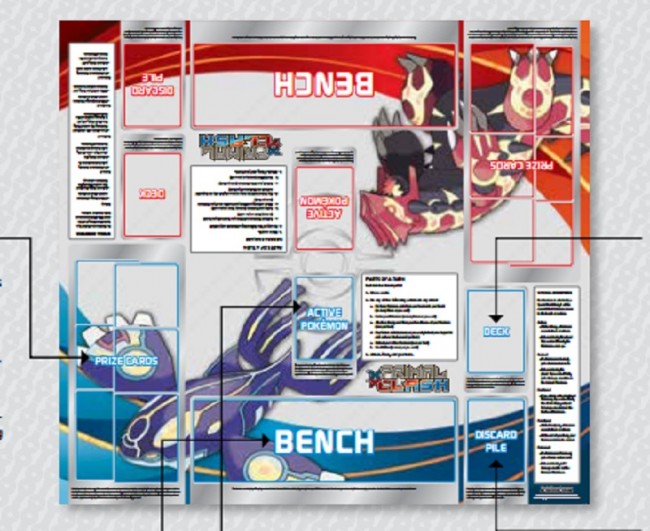 The Prize Cards are six random cards chosen from a player's deck at the start of the game. They are placed face down in the Prize Cards zone, and players that knock out a Pokemon of the opponent will be able to put one of these cards into their hand. The won Prize Cards can be played normally as if they were the player's own cards.

The Discard Pile is where knocked out Pokemons go, along with all discarded Energy cards. This is also where used Item cards go after their effect is completed.

Once both players are ready, they send the top six cards of their library to the Prize Cards pile face-down. Players then put all the Pokemon cards they have on the field to a face-up position to start the game.

That's it, the basic rules for Pokemon TCG. There are many more things that can be learned from playing the game, such as the various special conditions and the different abilities that Pokemon cards have, but knowing these basic rules will be enough to be able to battle it out with friends.

Of course, the deckbuilding process and strategies in Pokemon TCG is an entirely different thing, and is considered to be just as important as actually playing the game. For beginners, it would be best to buy starter decks, which are ready-to-play decks that would allow players to get the hang of the game.

An Actual Pokemon Gym Is Opening In Japan