[VIDEO] Meet ‘Affetto,’ The Blade-Runner Robot Who Can Feel the Pain 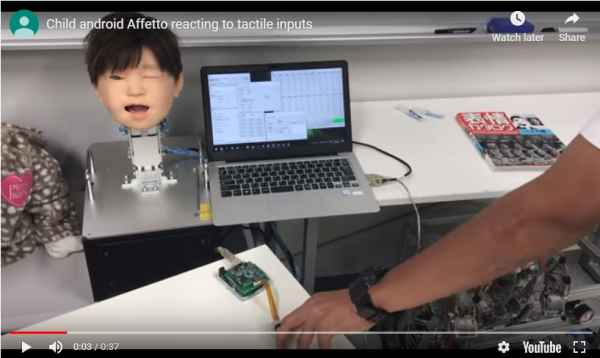 A team of Japanese scientists has invented a robot, a 'blade runner'-Esque creation that can feel what humans feel-pain. This group of experts from Osaka University in Japan programmed the robot to gasp or wince each time an electric current is applied to its skin, with the hope of instilling empathy to what's called AI or artificial intelligence in science and technology.

The scientists collaborated to insert a synthetic pain system presented in an 'affetto' form. Affetto, as described by observers as a "hyper-realistic child robot," was developed by engineers a couple of years ago. Indeed, in 2018, the 'blade runner' was designed with a little child's face. More so, this child-like robot can make and display real-looking facial expressions, and reacting to touches by means of a smile, grimace, or frown.

ALSO READ: Top 3 iRobots for Mom from Amazon this Christmas

How 'Affetto' was Created

For the inventors to create 'Affetto,' they identified "116 different facial points," and thoroughly evaluated the mechanisms required for the creation of specific and unique expressions. To date, these Japanese geniuses aim to enable the robot to process pain. Head researcher and Professor Minoru Asada, also Japan's Robotics Society president, ardently hopes that consequently, machines tend to have the capability and ability to feel morality and empathy.

Also, Professor Asada said, in Japan, they firmly believe all lifeless objects have a soul too, and these include the metal robots, which they claim to have no difference from humans in that aspect. Specifically, the lead researcher stated that there are fewer restrictions between objects and humans. As for the artificial or synthetic pain system, this was revealed at the previously held American Association for the Advancement of Science Meeting.

ALSO READ: Overheating Mobile Phones Can Now be Solved by Use of Spin Waves and Magnon Torque

As earlier mentioned, 'Affetto,' a "life-like human head," was first unveiled in 2018, and it has been, until now, said to be the most advanced android around the globe. Utilizing coded mapping of over 100 pressure points on the face, inventors can now create nuanced expressions like frowning and smiling. And the first time ever, they can even create reactions to pain. Similarly, the tactile sensors can trace gentle touches, as well as painful blows.

Remarkably, the Osaka University's R&D team is concealing the lines between human nature and machine efficiency through the use of AI to make the robots a bit more emotional and believe that they, like humans, are alive. And, by coding the sensors of pain into the robots' artificial skin, they are looking forward to seeing the machines displaying human feelings and emotions.

And finally, as to how Professor Asada describes their invention in general, they are implanting a pain nervous system and touch into the robot to make it feel pain. Their main intention to make the machine feel the pain is for it to understand the pain and touch in others. And to sum this all up, the leader, together with his team, aims to form a symbiotic society with synthetically intelligent robots, and one that can get hurt is the key element of that society.