The coronavirus pandemic has hit the world so hard that countries are locking down, and people are forced to stay indoors, as businesses and even schools close down in fear of getting infected with COVID-19.Situations are grim as the bigger nations race to find a cure--but even the virus has a silver lining: Earth finally got to breathe and heal for the first time in a long time. 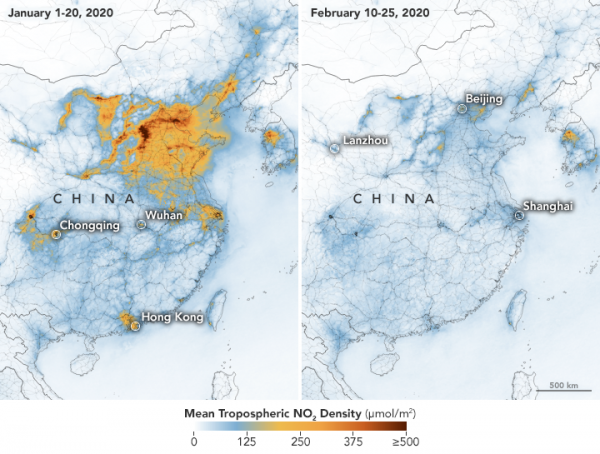 (Photo : NASA)
China has now seen good quality air days for a long while after the coronavirus outbreak occurred.

According to NASA, levels of nitrogen dioxide over China have "significantly decreased."

Both the European Space Agency (ESA) and NASA's pollution monitoring satellites have detected the changes, and the agency has revealed the images to the public earlier this month.

Based on NASA's report, they have evidence that the significant decrease was partly caused by the coronavirus pandemic and the economic slowdown that occurred after it.

The first image revealed by the agency shows the nitrogen dioxide levels over China from Jan. 1 to 20, a few days before the country has decided to shut down transportations going in and out of Wuhan, China, where the first cases of COVID-19 were reported.

Soon enough, China has started closing down its businesses, including large factories, due to the Wuhan lockdown and mass quarantines that happened shortly after.

The second image, captured from Feb. 10 to 25, then shows that the air over China is almost clear of nitrogen dioxide amid the nation's quarantine.

Nitrogen dioxide is a harmful gas that is emitted by industrial facilities, motor vehicles, and power plants. 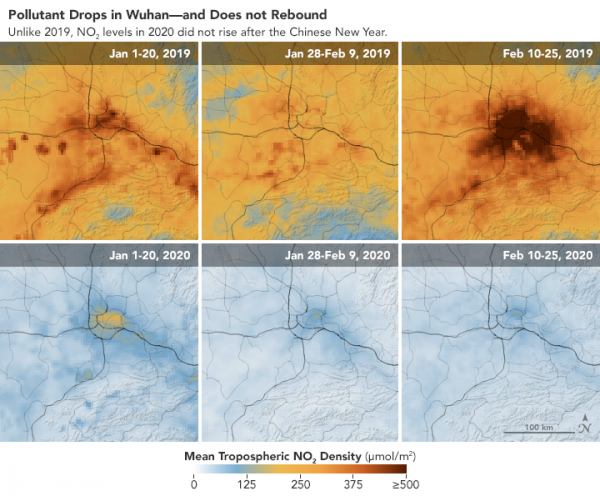 (Photo : NASA)
NASA first saw the difference in Wuhan, China, after the lockdown was implemented.

Additionally, according to the Ministry of Ecology and Environment in China, the average number of "good quality air days" in China has increased by 21.5% this February when compared to the same time last year, as reported by CNN.

"This is the first time I have seen such a dramatic drop-off over such a wide area for a specific event," said air quality researcher at NASA's Goddard Space Flight Center, Fei Liu.

She also said that air pollution is responsible for killing over 9 million people each year, and much of that came from fossil fuels.

As per USA Today, Marshall Burke of Stanford University wrote on his blog: "The reductions in air pollution in China caused by this economic disruption likely saved 20 times more lives in China than have currently been lost due to infection with the virus in that country."

But how could China's air quality help us all?

China is the world's leading emitter of greenhouse gases, so a significant decrease in their pollution is already a considerable portion cut out from the world's overall emission.

Italy's Lockdown has an Unexpected Positive Change Too

Besides China, Italy's lockdown and mass quarantine seem to be helping the environment as well, as images of Venice's crystal clear canals are circulating online, and people seem to love the positive change.

Additionally, air quality in Italy has also been reported to have improved.