American aerospace company Lockheed Martin announced that they are expecting fewer deliveries of the radar-evading F-35 Lightning II in 2020 as the coronavirus has disrupted its global supply chain.

No figures on how many F-35s will not be delivered for the year since the aircraft company is still assessing the probable outcome due to the impact of the coronavirus pandemic.

Lockheed Martin CEO Marillyn Hewson told DefenseNews that the disruptions brought by the coronavirus pandemic resulted in the reduction of the company's sales expectations for the years. Hewson added that the health crisis has slowed down the production and supply chain activities in the aeronautics business, which also affected the production of the fifth-generation fighter. 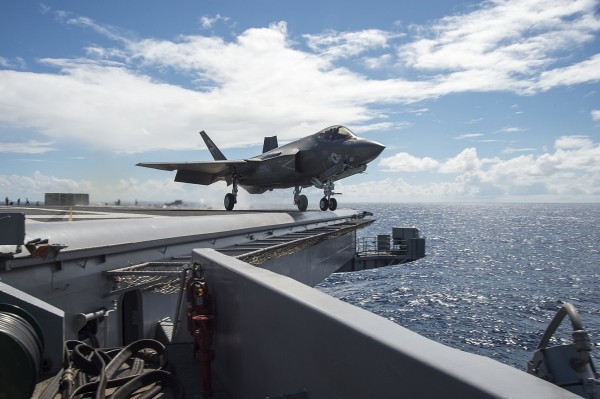 (Photo : National Museum of the U.S. Navy)
An F-35C Lightning II carrier variant assigned to the Salty Dogs of Air Test and Evaluation Squadron (VX) 23 launches off the flight deck of the aircraft carrier USS Dwight D. Eisenhower (CVN 69) during sea trials in the Atlantic Ocean

ALSO READ: Breaking News! COVID-19 Lasts Up To 18 Days From Infected Hosts; More Coronavirus News You Should Know All Based on Studies

The production slowdown of F-35 will significantly affect the revenue of the company for the year. Among the business lines under Lockheed Martin's aeronautics unit, F-35 Lightning II remains the largest source of revenue. In a report in FlightGlobal, the stealth fighter manufacturer said that it reduced the annual revenue projection for its aeronautics unit alone by at least 2% or about $24.6 billion and the yearly profit projection for the entire company also declined by 1% or $2.67 billion. Its sales projection for the year also went down from an earlier estimate of $62.75 billion to $64.25 billion to about $62.25 billion to $64 billion.

In 2019, Lockheed Martin delivered a total of 134 units of F-35 stealth jets around the world, which is more than its target for the year. For this year, the company aims to deliver 141 F-35s to the United States and its allied countries. But due to the pandemic, it is projecting fewer deliveries of F-35s this year. By March 31 this year, it was only able to roll out 22 jets, which is far lower than the 26 aircraft handed over for the same period last year.

"What we're seeing is there are local distancing requirements that are being more-stringently applied across the globe. There's workforce disruption. There are likely impacts that are happening throughout their supply tier hierarchy. There are shipping constraints," Lockheed Martin executive vice-president and chief financial officer Kenneth Possenriede told FlightGlobal.

Possenriede said that most of the stealth aircraft are built at the final assembly in Texas. At the same time, the remaining jets go through final assembly in facilities located in Cameri, Italy, and Nagoya, Japan. The quarantine measures disrupted the activities in the assembly facilities in Italy and Japan, but both sites are already back in operation.

Possenriede explained that they are seeing an increase in supplier shortages due to travel restrictions and limited access to their sites. The scarcity of supply means fewer units will be assembled.

The manufacturer expressed its optimism that normal operations will resume in the upcoming months.

The F-35 Lightning II is an all-weather, multirole stealth fighter that can fly at a top speed of Mach 1.6 and range of 2,200 kilometers. Other than its stealth features, it can carry in its internal bay top-of-the-line weapon systems.

Also read: The F-35 is one heck of a fighter jet and...just a few clicks away from a hack

ⓒ 2021 TECHTIMES.com All rights reserved. Do not reproduce without permission.
Tags: Coronavirus F-35 Stealth
Most Popular