For three months, reports and images about the coronavirus have followed us every day. Even astronomers have spotted face mask-wearing elements in space.

The Arecibo Observatory in Puerto Rico was tracking the 1998 OR2 asteroid when it captured a radar view of it, which looks like it is wearing a face mask. The image of the "masked" asteroid was shared on Thursday, April 23, by the University of Central Florida. 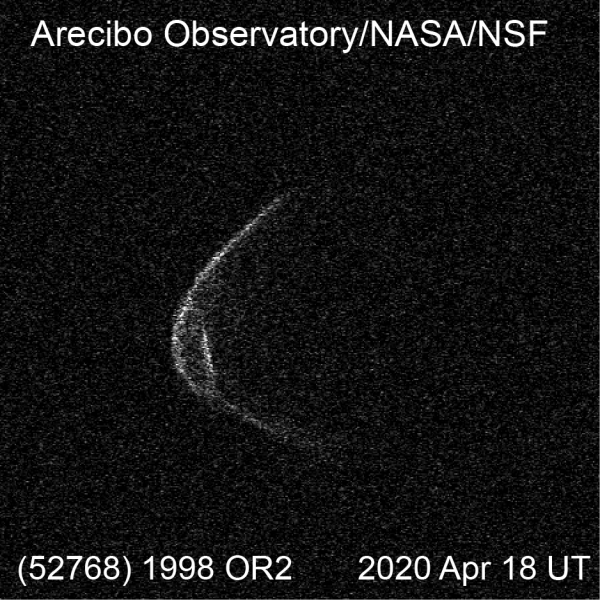 Anne Virkki, head of the Arecibo Observatory's Planetary Radar, said the asteroid is scientifically fascinating as its small-scale topographic features hills and ridges on one end. "But since we are all thinking about COVID-19 these features make it look like 1998 OR2 remembered to wear a mask," said Virkki.

At a safe "social" distance from Earth

This asteroid will come near the Earth at a safe "social" distance. Asteroid 1998 OR2 makes its closest approach to Earth on April 29 when it will be 16 times farther than the distance to the Moon.

Scientists say this visit will not be the asteroid's last, after learning about asteroids and their orbital paths though radar observations. "In 2079, asteroid 1998 OR2 will pass Earth about 3.5 times closer than it will this year," said Flaviane Venditti, a research scientist from Arecibo Observatory, adding that it is important to know its orbit precisely.

"The radar measurements allow us to know more precisely where the asteroid will be in the future, including its future close approaches to Earth," says Venditti.

Future images may give us a better look at the rock and its mask-like facade. We've seen some fun radar views of asteroids in the past, including one that looked like a hippo and another that resembled tumbling dice. The fuzzy imagery gives plenty of room for active imaginations to play.

A team of experts from the National Science Foundation that monitors near-Earth asteroids says this asteroid 1998 OR2 is a special type, which is called Potentially Hazardous Objects (PHOs).

This type of asteroid does not pose any immediate danger to the Earth. They measure over 140 meters or about 500 feet and hover within 5 million miles of Earth's orbit. Thus, observations like the ones conducted at the Arecibo Observatory are used to learn about their future trajectories.

Also, these allow the scientists to plan necessary responses should an asteroid pose a threat to Earth.

"Although this asteroid is not projected to impact Earth, it is important to understand the characteristics of these types of objects to improve impact-risk mitigation technologies," said Virkki.

The team started monitoring the asteroid on April 13 and will continue to collect data until April 23 when it will no longer be visible from the observatory.

Operations around the world have been affected by the coronavirus pandemic. However, Arecibo Observatory continues its significant contributions to science and planetary studies. The planetary radar operations cannot be fully run remotely because it requires at least one radar operator and one scientist on the site.

Since the team of scientists and telescope operators have been adhering to health and safety guidelines, they have limited the number of scientists using the telescope, and they also wear masks during their observations.