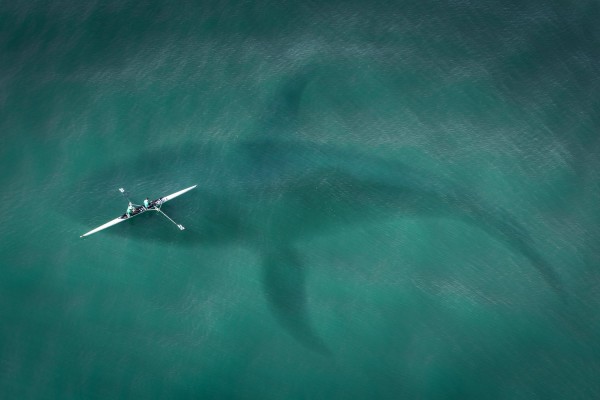 The roughly 2,000-pound female whale is being monitored by way of marine studies non-profit OCEARCH who tagged it with a monitoring tool in September.

OCEARCH makes use of GPS generation to track the movement of more than 400 tagged aquatic animals, including sharks, dolphins, whales, seals, and turtles. Their goal is to assist scientists in gathering formerly unattainable records within the ocean.

Big @UnamakiShark is approaching Bermuda! In the past we’ve seen @MaryLeeShark and @RockStarLydia buzz past the island. What else do all 3 of these sharks have in common???

How the tracker works

The trackers "ping" when the dorsal fin located at the back of a tagged shark breaks the surface of the water, sending out a signal to a satellite orbiting above the Earth. This allows OCEARCH researchers to pinpoint the animal's location.

Combining several of those pings over a length of time permits OCEARCH to map out the movements of a given shark, providing precious insights into their behavior.

On Apr. 29, Unama'ki pinged inside the waters directly off north of Bermuda, a British island territory within the North Atlantic, positioned around 650 miles east-southeast of North Carolina.

At the beginning of this month, Fox-affiliate TV Station WXXV25 said the shark sailed far away from the East Coast. The whale started out making its way deeper into the Atlantic in what researchers call a "pelagic adventure," one into the open ocean.

ALSO READ: Fleets Of Wasteshark 'Aquadrones' Could Be Cleaning Ocean Waste In The Future

This is not the first time that OCEARCH has observed one of these adventures being taken by using the fantastic whites its miles monitoring. Still, the group says that it may display some fascinating information.

"This is not necessarily a surprising observation because we have seen it before from several other mature female white sharks," OCEARCH Founding Chairman and Expedition Leader Chris Fischer said.

The marine biologists believe the female whales are gestating. Fischer noted a previous shark they tracked into the open ocean, named Mary Lee, returned to shore near Long Island, which is a white shark nursery.

"If Unama'ki makes a long journey out in the open ocean, she could lead us to a new nursery when she returns to the coast if she is gestating," Fischer said. He added they would be watching the giant whale closely.

Unama'ki was first tagged through OCEARCH in the waters off Cape Breton, Nova Scotia, Canada. Since then, the shark has traveled more than 5,700 miles, journeying all the way down the North American coast and the Gulf of Mexico before making its way into the open ocean.

One exciting move Unama'ki made, according to Fischer, was traveling west of the Mississippi River. He said the direction is not something they often track white sharks doing. "She also spent a long time in the Gulf of Mexico compared to other sharks we've tracked," Fischer added.

The shark's name, which means "land of the fog," is what the indigenous Mi'kmaq humans of Nova Scotia name Cape Breton, where the animal was tagged.