Playing with the classic "may the force be with you" line from the equally classic Star Wars franchise, Epic Games' Fortnite brings back some Star Wars-themed loot for its May the 4th holiday, including some skins and the popular lightsaber. 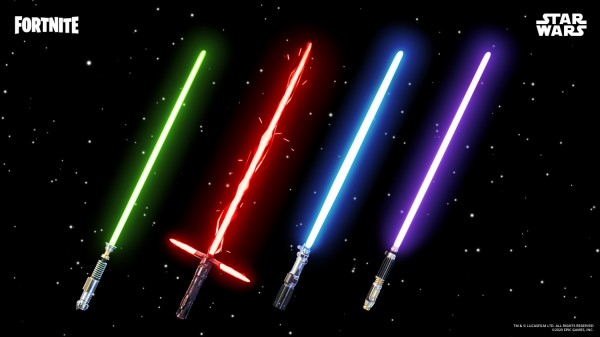 (Photo : Fortnite/Twitter)
The lightsabers are back for a limited time only on Fortnite.

Star Wars Loots is Back!

According to PCGamer, Fortnite will be bringing back the lightsabers, which are available in four different colors Obi-Wan and Rey's blue lightsaber, Luke's green saber, Mace Windu's purple lightsaber and perhaps the coolest of all: Kylo Ren's special red lightsaber, complete with the crossguard.

Feel like a Jedi as Lightsabers have returned for a limited time!

Drop in game now and show off your skills. pic.twitter.com/koN5fGFc0i — Fortnite (@FortniteGame) May 3, 2020

Apart from that, the Kylo Ren, Rey, and Sith Trooper outfits are also back along with the "dark side" emote that players can get for 22 V-Bucks as well as a Vibro-scythe Pickaxe that was inspired from one the weapons used by the Knights of Ren.

Fulfill your destiny.#StarWarsDay is almost here and the Rey, Kylo Ren and Sith Trooper Outfits are back in the Shop! pic.twitter.com/YXC2DMuO6O — Fortnite (@FortniteGame) May 3, 2020

The game's official Twitter account also announced the Star Wars holiday, as well as the available items and loot fans of both the game and the franchise, could get.

However, you should hurry if you want to get any of these items since the holiday event will only last for a few days--specifically from May 3 to 5 only, as noted by GameSpot.

The Daily Express also reported that some challenges linked to the franchise have also been re-enabled.

May the Force be With You

"Star Wars Day arrives in Fortnite. To kick off the galactic celebration, we're bringing back lightsabers starting May 3rd along with famous Resistance fighters, First Order villains, and more from a galaxy far, far away," Epic Games explained.

Besides Fortnite, the Star Wars Celebration continues with some deals on various games from the franchise, including the Star Wars Jedi: Fallen Order, which is currently at a 40% discount on Steam.

A few older releases are also on sale to celebrate one of the world's most popular and well-loved franchises.

Plus, anyone who would love to binge-watch all nine films could do so with Disney+ where they can also watch The Mandalorian, a spin-off of the original Skywalker Saga.

As of now, fans of Fortnite are expecting a few more surprises from Epic Games after season 3 has been delayed to June, especially since the Battle Pass challenges have come to an end.

Among the most recent events in the game is Travis Scott's Astronomical event, where he launched his new song, and fans were able to acquire some cool new limited loots and complete some Astronomical challenges.

The event was extremely successful that Fortnite broke its own record.

According to Essentially Sports, there were 12.3 million concurrent players that watched the event altogether, making it one of the game's most remarkable and unforgettable moments that will go down in history.

The rapper himself witnessed the event and streamed it live for his followers via Instagram.

Scott loved the event so much that he was planning to adopt the idea in real life, specifically during Coachella, a massively popular music festival.

How he will adopt it is unclear, but it's apparent that Epic Games and Fortnite did a really great job despite the current lockdown and work-from-home situation in the US and many other parts of the world.

Read Also: Diplo's Fortnite Concert Was Not as Hyped Up as Travis Scott and Marshmello's, Here's Why