After orbiting the Earth for a week, a Chinese rocket has started to fail and is expected to plunge back to Earth in a matter of hours and will be one of the largest space junks to fall back down to Earth's surface. 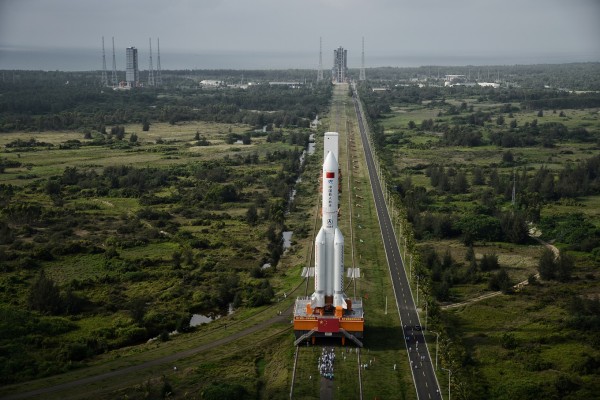 (Photo : CHINA DAILY/REUTERS)
After just a week of orbit, the Long March 5B, a Chinese rocket, has failed and is now falling back to Earth.

According to Forbes, the Chinese rocket, Long March 5B, was launched on May 5, carrying a prototype of a crew capsule that is similar to SpaceX's Crew Dragon to orbit the Earth.

However, just days after the launch, the core stage of the rocket is now in a collision case with the upper atmosphere and will burn away some of its parts, leaving behind space junk that will plummet down to Earth and impact the planet.

"It is the most massive object to make an uncontrolled re-entry since the 39-tonne Salyut-7 in 1991," Jonathan McDowell wrote on his official Twitter account.

McDowell is a prominent Harvard astrophysicist that is one of the experts who are thousands of objects orbiting our planet, including tons and tons of space junk from various spacecraft launches over the years.

The latest projection is that a 37,000-pound rocket will enter the atmosphere at any moment and burn on its way down, with the majority of its massive body burning as it re-enters the Earth's atmosphere.

Whatever that doesn't burn up will be left to fall to the Earth.

Read Also: Mysterious X-37B Preparing to Go Back to Space for 'On-Orbit Experiments'

Several groups are tracking the rocket as of now, including the US military as well as the private group Aerospace Corporation.

In 2018, another Chinese spacecraft, the Chinese Tiangong-1 space station, fell back down to Earth, allegedly falling somewhere in the ocean, but the Long March 5B is much larger than that--around fifth the mass of Skylab, which also plummeted back to the surface on 1979 near Perth, Australia.

According to the news outlet, the spacecraft's uncontrolled re-entry into our planet's atmosphere might be visible to the naked eye.

Larger spacecraft are often equipped with a steer that allows their makers to steer the rockets into the atmosphere to a safer location, usually the south Pacific. Still, the Long March 5B doesn't seem to have one or is perhaps damaged, making it uncontrollable.

McDowell also gave a heads up for everyone who is new to this sort of situation and are following the news online on their social media.

The Harvard astrophysicist said that it is possible they could miss the exact moment the space junk enters our atmosphere. They could be late in noticing that it has re-entered, especially when the pieces of the rocket fall into the ocean without some eyewitness reports.

In addition, it is hard to even for these experts to predict when the rocket would re-entry--even with the past situations like this--since the object is moving at a thousand miles per hour, which is extremely fast.

If the rocket breaks apart, the debris is also scattered in different places over a hundred or thousands of miles away from each other.

The Chinese rocket, which has been labeled CZ-5B by those tracking it, is said to be flying approximately 41 degrees north and south attitude, which means it will land in New York in the north and Australia in the south and anywhere in between.

Read Also: Intel and Penn Medicine Partnering to Develop an A.I. That Can Discover Brain Tumors