The SpaceX vehicle prototype, Starship SN4, met a catastrophic end after it failed its static engine fire test. According to Techcrunch's latest report, the Raptor engine in SpaceX's Starship SN4 prototype launch vehicle exploded on Friday, May 29, after another static fire test in Boca Chica, Texas. 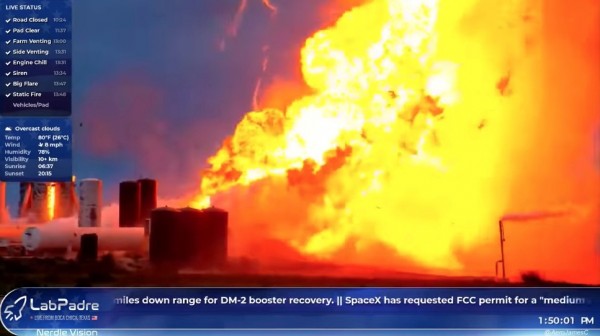 (Photo : LABPADRE / YOUTUBE /via REUTERS )
A prototype of SpaceX rocket Starship explodes during ground tests, in Boca Chica, Texas U.S., May 29, 2020. in this still image obtained from the social media video

Also Read: Clouds are a Rocket Launch's Worst Nightmare; Why the Historic SpaceX and NASA Flight was Delayed

The Launch Readiness Review for the second attempt of @NASA and @SpaceX's #LaunchAmerica mission to the @Space_Station has concluded and we are go for a second attempt. Weather is currently 50% go for launch at 3:22 p.m. ET on May 30: https://t.co/zltXpZaXYK pic.twitter.com/2PNAHBGEYD — NASA's Kennedy Space Center (@NASAKennedy) May 29, 2020

According to the report, it is still unclear what went wrong since the static engine fire test is the fourth one of SpaceX's vehicle prototypes. The test was purposely conducted for the development of Starship, SpaceX's new spacecraft.

Also Read: Space Funerals: Celestis And Aura Flights Will Send The Ashes Of Your Loved Ones In Space

Although the Starship was designed by the company to replace its Falcon Heavy and Falcon 9 rocket, it is still not yet flight-proven since it is still early in the development stage. A Federal Aviation Administration (FAA) approval was just secured by SpaceX to conduct short suborbital test flights for its Starship prototype. According to another report of Techcrunch, SpaceX has been permitted by FAA to have reusable launch vehicle missions.

Similar tests were already conducted by the Elon Musk-led space company, but the previous missions used its early prototype "Starhopper," a smaller and much more rudimentary vehicle compared to the planned production Starship. Starhopper was purposely used to test the capabilities of SpaceX's Raptor engine that will be used to propel its Starship prototype.

After its previous flights, SpaceX started developing multiple iterations of Starship's full-scale prototype. However, its Starship prototype's iterations have succumbed during pressure testing.

Although SpaceX's Starship SN4 has passed not only pressure tests, but also static fire tests, it's impossible for the vehicle prototype to conduct short space flights after it was completely destroyed on May 29. The accident happened at 1:49 p.m., Texas local time, two minutes after completing its engine test fire.

The failure is not the first one the SpaceX's Starship prototype has met. The space company conducts several safety precautions when running engine fire tests, including clearing the area to ensure the safety of personnel and other individuals. The tests are done to check if the space vehicle prototypes are safe and reliable before they are launched into orbit.

SpaceX is already working on assembling the SN5 in Boca Chica, and is looking to develop additional vehicle prototypes. The company expects to resume its testing program as soon as possible once it clears the test stand and moves to the newest prototype after the failed test.

Also Read: Clouds are a Rocket Launch's Worst Nightmare; Why the Historic SpaceX and NASA Flight was Delayed