Robot manufacturer Boston Dynamics has now put Spot out in the market after leasing the four-legged robot to companies since last year. Any US businesses can now own Spot for just $74,500.

It retails for almost the same as a Tesla Model S car. However, Boston Dynamics argues the buyers will get the "most advanced mobile robot" in the world that can go almost anywhere as long as there are no ladders.

The company announced that businesses can already pre-order Spot. The four-legged agile robot has garnered attention for the different tasks it can perform that include running, climbing stairs, and even reminding people to practice social distancing. 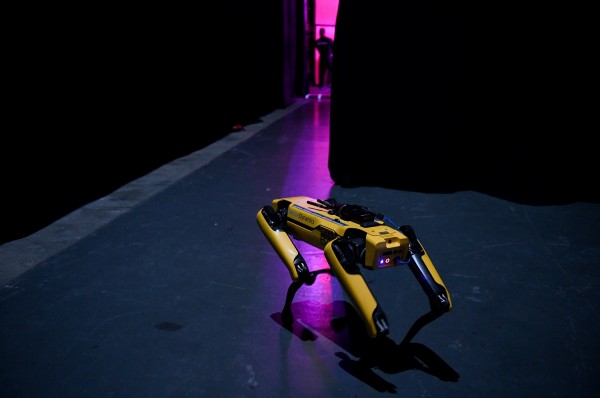 (Photo : Web Summit/Wiki Commons)
SpotMini, Boston Dynamics, Robot, prior to going on Centre Stage during the final day of Web Summit 2019 at the Altice Arena in Lisbon, Portugal. Photo by Harry Murphy/Web Summit via Sportsfile

The announcement came on Tuesday, June 16, while the dog is still on pre-order and will take six to eight weeks to ship.

Spot can run about 5.2 feet per second, has cameras that give it 360-degree vision, and can continue operating at a vast range of temperatures from -4 to 113 degrees Fahrenheit. It's also dustproof and waterproof, so it requires less cleaning.

While Spot seems lively, it can do tasks that are limited to surveying and data collection. The robot can also perform inspections and create 3D maps of construction sites. Spot can also search for machine faults in offshore oil rigs during trial deployments.

Other tests include assisting in COVID-19 patients in a hospital triage as well as working with a police bomb squad.

"The combination of Spot's sophisticated software and high-performance mechanical design enables the robot to augment difficult or dangerous human work," said Marc Raibert, Boston Dynamics chairman and founder in a statement. He also added that Spot can ensure human safety in environments and tasks.

Interested companies or individuals can order a Spot robot from the Boston Dynamics online store. They are marketing Spot as a multipurpose "mobility platform" that can be customized and programmed to perform patrols and inspections.

Adam gives steampunk a whole new meaning with his first Spot project, a robot-driven carriage! Watch @donttrythis build his first integration on the platform and use the API to adjust Spot's gait to provide the right forces to tow him around San Francisco: https://t.co/5zP2uGpo3b pic.twitter.com/Yax9Y3HcdJ — Boston Dynamics (@BostonDynamics) February 18, 2020

"We mostly sell the robot to industrial and commercial customers who have a sensor they want to take somewhere they don't want a person to go," Zack Jackowski, Boston Dynamics' lead robotics engineer, told The Verge.

The company vows to continue upgrading Spot based on customers' feedback, although the robot is already updated after a recent software update. The update, called Spot 2.0, features more advanced autonomy and navigation.

Like buying a car, customers can test drive the robot before they buy it. "Some of the customers we're speaking to are in the 'shut up and take my money' mode," says Perry. However, he added that others are interested in Spot to want to visit their lab and "drive a robot.'" The demo feature resolves that problem.

The good thing is that customers will be able to test drive Spot while at home. With its remote operation feature, potential customers can take a unit for a test drive in the company headquarters' robot assault course.

Customers just need to log in to a web app on Boston Dynamics' site and set up the camera view. They can choose from using external cameras in the laboratory, Spot's cameras, or a 3D map of its surroundings. Once settled, users can move with the WASD keys.

In case Spot tips over, users just need to press a button and it will roll to one side, then push itself up with its legs walk again.

Boston Dynamics says it will be releasing a similar teleoperation program to customers this year. It will also launch an update that will feature a head-mounted robot arm that will provide new applications for features including data collection, manipulating its surroundings, turning valves opening doors, and pressing switches.