A massive dust plume is coming from Africa and is traveling across the Atlantic Ocean arriving at the southeastern United States sometime this week. And according to experts, it's not looking good amid the coronavirus pandemic. 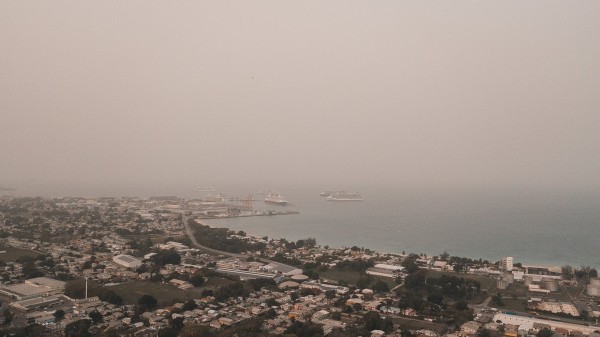 (Photo : REUTERS)
The cloud dust has already reached South America and is expected to reach southeast US in the coming days.

Sahara dust plume to reach the US

In a previous report by Tech Times, it was revealed that the Sahara Dust Plume is crossing the Caribbean Sea and has already caused a thick haze in Puerto Rico. It is expected to reach the US by Wednesday, June 24, or the following days.

Although it's not something new, some experts have given further details about it, saying that it could be the biggest and most intense dust plume to come from Africa in over 50 years. Its size could aggravate health problems, especially respiratory diseases. The dust plume is so large that it can be seen from satellite imagery.

Astronaut Doug Hurley, who is currently aboard the International Space Station (ISS) also posted a magnificent photo of the dust plume from his view up in space and, suffice to say, it is indeed huge.

We flew over this Saharan dust plume today in the west central Atlantic. Amazing how large an area it covers! pic.twitter.com/JVGyo8LAXI — Col. Doug Hurley (@Astro_Doug) June 21, 2020

On a typical day, it could already be problematic, as people who are sensitive to poor air quality and dust would suffer from allergies. Those who have asthma and other respiratory illnesses will also have a difficult time breathing.

However, there is one massive problem: the US is the leading country with most cases of coronavirus infection which attacks the lungs and causes severe pneumonia to critically ill patients.

"Dust particles are what we call particulate matter, and we know that breathing in fine particles of anything is not good for the respiratory tract - especially people who are sensitive to poor air quality," said geological sciences Professor Thomas Gill, from the University of Texas in El Paso.

Read Also: NASA's 'Wright Brothers Moment' Will be on Mars With Launch of Ingenuity Helicopter on the Red Planet

US healthcare system may need to prepare

According to NBC News, Gregory Wellenius, an environmental health professor from the Boston University School of Public Health, there are emerging data suggesting that people affected by high levels of pollution are more at risk of developing severe cases of COVID-19.

"There may be potential interactions between air pollution and COVID symptoms or progression, but it's still pretty early data," he said.

Despite that, experts believe pollution could be incredibly dangerous in today's world. Additionally, the United States' healthcare system is already having a hard time due to the COVID-19 pandemic with hundreds of thousands of patients but limited bed spaces, experts, and protective gear.

With that, Wellenius said that the potential problems that the dusty air might bring could add more pressure to the country's overburdened healthcare system.

"Things like the wildfire season, hurricane season, and extreme weather events, including this dust storm, may be magnified this year because resources are already stretched thin," the professor said.

He also reminded everyone that despite the fact that we are in the midst of a pandemic does not mean other hazards aren't happening.