Kojima Productions, owned and founded by legendary game developer Hideo Kojima, has been in the spotlight in the last few days. In a report by Game Revolution, it appears that an administrator of the Kojima Productions Facebook account finally had enough of the negative comments on the platform and decided to clap back at one commenter who said that "The Last of Us 2" is better than KojiPro's game, "Death Stranding."

The Facebook account does not have the blue tick that signifies the account is a verified page, so many are uncertain whether the account really is theirs. Nevertheless, the account's administrator asked their followers how their weekend was and if they could share their best screenshots of the game. 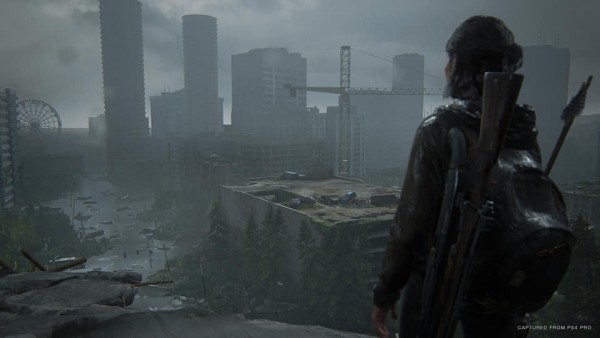 (Photo : Naughty Dog, LLC/Facebook)
Did Kojima Productions shade The Last of Us 2 with their Metacritic score?

One commenter sent a photo of a "The Last of Us 2" copy and said that "Death Stranding" was boring and that they had sold their copy to get TLOU2, to which an admin replied, "The choice of game reflects the quality of its player. Maybe it suits you more. P.S. Also the choice of words."

The reply was also accompanied by a screenshot of "The Last of Us 2"'s Metacritic score, which has a whopping Metascore of 95 from critics, but only a 4.4 out of 10 for the User Score. As of this writing, the snarky clap back by the page has been removed, but fans of "Death Stranding" were quick to defend the game. 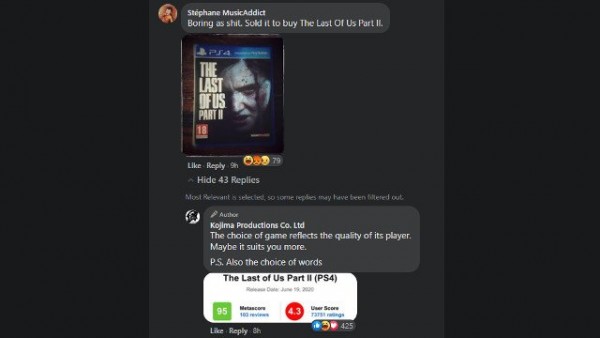 In the About section of the page, a "fan of Kojima" was written, so it is highly possible that the account is not associated with Kojima Productions in any way, and the admin's reply does not reflect that of the company. Nevertheless, there is one controversy that the company has officially spoken about.

In a report by GameSpot, the gaming company denied the rumors that claimed P.T. was created behind Konami's back by a small group of people from Kojima Productions.

"KOJIMA PRODUCTIONS normally does not comment on rumors or speculation, however we can confirm that the article recently posted on https://t.co/zDfUnEnnip is categorically false."
- Jay Boor, Global Head of Marketing and Communications https://t.co/d3o5rV0K0O — KOJIMA PRODUCTIONS (Eng) (@KojiPro2015_EN) June 24, 2020

The report was published by a French gaming site known as Gameblog.fr that the team linked on their official Twitter account along with their statement saying that the report was "categorically false."

Various rumors have appeared after the split of Hideo Kojima from Konami in 2015, whom he worked with for a long time and has created several A-list and popular games for, including the critically acclaimed title "Metal Gear Solid V: The Phantom Pain."

Many say that the game was missing several things by the end, and they believe it was because of the growing animosity between the company and Kojima. Additionally, the highly anticipated addition to the "Silent Hill" franchise has been canceled which gave way to more speculations and talk.

Nevertheless, in its teaser, P.T., still lives on as one of the most haunting teasers from the legendary game developer. There has also been speculation saying that Kojima and his team at Kojima Productions are working on the new "Silent Hill" game, but nothing has been confirmed and people are beginning to lose hope that it will ever see the light of the day.

Read Also: How to Recruit Pikachu and Get More Acorns on Pokemon Cafe Mix? Game Now Out on Mobile and Switch

ⓒ 2021 TECHTIMES.com All rights reserved. Do not reproduce without permission.
Tags: Kojima Productions Hideo Kojima Konami P.T. Silent Hill P.T. Death Stranding Naughty Dog The Last of Us The Last of Us 2 TLOU2 TLOU
Most Popular