Rare Comet That Will Only Be Back After 6,000 Years Will Light Up the Sky This Month! Here's How to Watch!

Over the next few weeks, there's hope for a significant discovery over our night sky! Comet NEOWISE is gaining popularity and enthusiasm among professional astronomers quite quickly. Clear comet observation with a naked eye is an incredibly rare occurrence, perhaps happening just a handful of times in a lifetime. Comet Hale-Bopp came back in 1997 with the last significant sighting in our area. 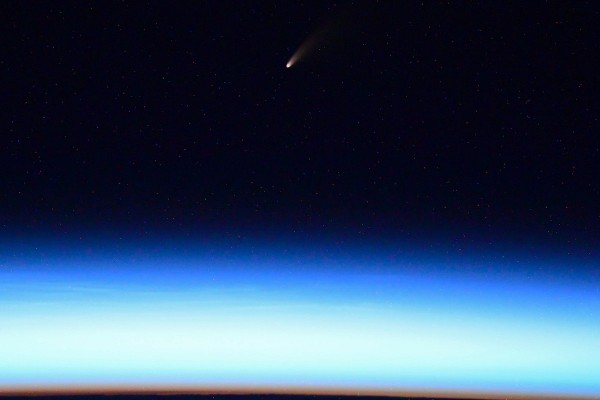 There was not much fanfare when Comet NEOWISE (named for the space telescope discovered it) was first located back in March. It was barely visible through a telescope. The thinking was, like its predecessors, comets ATLAS and SWAN, it probably wouldn't survive its journey past the Earth.

Comet NEOWISE has reemerged in recent days from its journey around the sun looking brighter than everybody expected, almost as though it had experienced a recent outburst.

Some pics of #cometNEOWISE which could be seen at my location from about 0330 EDT up until sunrise (but was far easier to spot when it was darker). It could be easily seen by the naked eye here however, binoculars certainly help narrow things down better. #nhwx #nh #comet pic.twitter.com/hsiRfLGkBH — Ryan Knapp (@WXKnapper) July 6, 2020

However, astronauts captured a breathtaking natural light display from a comet that was also dazzling skywatchers on Earth. The streaker, named Comet NEOWISE or C/2020 F3, was first on the scene in late March.

The icy lump was quite weak in our skies at that point, and astronomers weren't sure that would change. But as time went by, the Comet glowed immensely, seducing skywatchers even after they were disappointed by two other recent comets that faded away.

"Last night's fireworks, for real. Because Science," NASA astronaut Bob Behnken said in a tweet posted from the International Space Station on Sunday (July 5), the day after Americans celebrated the Fourth of July with artificial firework displays.

The Comet was also photographed by Behnken 's colleagues onboard the orbiting laboratory, Russian cosmonaut Ivan Vagner, with his tail in sharp brightness against the blackness of space seen over Earth's glowing blue atmosphere

In particular, Vagner reflected on the spectacular tail of Comet NEOWISE, the distinctive feature of comets as compared with their rocker counterparts, asteroids. A comet's tail is formed by radiation from the sun that pushes dust out of the fuzzy blob that surrounds the Comet as its ice warms and turns to gas.

While Comet NEOWISE may not live brightly up to the stunning Comet Hale-Bopp, it appears to be visible to the naked eye for the next few weeks!

How do you see that, then?

According to Eddie Irizarry, ambassador of the NASA solar system, it will remain visible just before and around the first light until July 11. Then, hopefully, the Comet will dip below the horizon as it transitions from being an early riser to a sensation of cocktail time. Maybe the best chance, too, will come out in the evening sky, starting around July 12.

It will start to be visible again about July 15 and 16 in the evening. It should be slightly easier to see when it's a little higher in the sky during the second half of July. It will be closer to the Northeastern horizon until that time.

Looking at the northwest horizon in the evening, on July 22 (about 64 million miles), the Comet would gradually climb higher and higher as it makes its closest pass by Earth.

Comet NEOWISE will appear around 30 degrees (or three fists) above the horizon in the evenings during the last week of July.

Right now, the advice being given by those who have already observed the Comet is to use binoculars or a telescope to find it in the sky first. If you have found it and its split tail logo, you will be able to track it with your naked eye.

Again, to see the Comet with the naked eye, you will need ideal viewing conditions. You need a clear view of the horizon, close to a cloudless sky, free of haze, and free from light pollution. The use of binoculars or a telescope is sure to help!

ALSO READ: Astronomers Claim They Found the Edge of the Milky Way Galaxy

ⓒ 2021 TECHTIMES.com All rights reserved. Do not reproduce without permission.
Tags: comet
Most Popular