Sucker Punch Productions' Ghost of Tsushima is finally out now, and lucky are those who have pre-ordered the game as they can start playing today. If your copy hasn't arrived yet, reading some guide on how to beat the game could be helpful in your journey later.

(Photo : Sucker Punch Productions/Facebook)
There are tons of hidden altars scattered across Ghost of Tsushima.

How to Find the Ghost of Tsushima Hidden Altars

Among Ghost of Tsushima's features is its lush and beautiful open world. But it's more than just a beautiful background, as some parts of the game will incorporate your surroundings for environmental puzzles.

One of the game's offerings is hidden altars, scattered across the island and, once honored, will create interesting effects. Plus, if you have found enough of these hidden altars, you can also unlock the Honor the Unseen, hidden trophy.

According to GameSpot, you'll need to find at least 10 of these hidden altars and simply bow to them.

However, most of these hidden altars are hard to spot, often blending in with the background in the most unassuming places, with a wooden signpost showing a man's silhouette bowing down as its only marker.

Here are ten of the hidden altars in Ghost of Tsushima to help you get the trophy, with six locations in the Izuhara region and four more in Toyotama.

Read Also: [Guide, Tips] Ghost of Tsushima: How to Beat the Mongols the Fastest Way

The Kechi Fishing Village is located west of the Hiyoshi Springs on the river. After you've liberated the tiny village of Mongols, head to the dock over the river to find the altar.

South of Kechi is another outpost, so it might be a good idea to go here after your quest at Kechi. You can also find the altar at the dock over the river where a wooden sign stands.

Buddha Statue at the Golden Temple

You'll most likely see your first hidden temple early on in the game--but it can be hard to miss, especially as the giant Buddha Statue isn't precisely marked with a sign, but it is considered a hidden temple.

You'll find the statue in Ariake at the Golden Temple, where you'll eventually be led in Act 1. Head to the west side of the village where the stairs are and go up to find the Buddha statue.

As you continue Act 1, you'll eventually unlock a side quest known as "Mythic Tale The Legend of Tadayori." Finish the quest to find Tadayori's grave, which is in Houren's pasture and marked by purple flowers. In the middle of the pasture is a shrine that counts as a hidden altar.

The Cemetery at Yoichi's Crossroads

Southwest of the Hiyoshi Springs is another Mongol outpost known as Yoichi's Crossroads. Next to the Mongol camp is a cemetery. Follow the stairs leading to the cemetery's highest point to find a group of statues marked with the wooden sign.

Pillar of Honor at the Kaneda Inlet

Located at the very north of Izuhara and west of Castle Kaneda is the Pillar of Honor. Just head to the coast of the Kaneda Inlet to find the pillar. 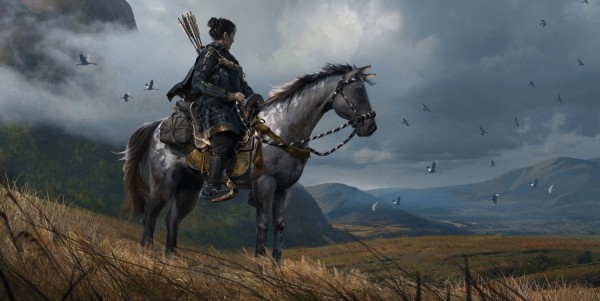 (Photo : Sucker Punch Productions/Facebook)
You can unlock the hidden trophy once you find ten hidden altars.

The Shinto Shrine on Kushi, which is located north of the Yarikawa Stronghold, holds two hidden altars that are next to each other.

Locate the shrine and start going up until you squeeze between two rocks and find a frog statue. There are two in those locations, so simply head to each frog and bow down.

Pillar of Honor at the Old Kanazawa Marsh

Go southwest of the Old Kanazawa Marsh, which is located between Akashima and Umugi. The pillar is in the middle of the field and will be hard to miss.

As you continue the story in Act 2, you'll eventually find yourself in Omi Village. When you get there, head north of the village to reach the Sakai cemetery, where you can find Jin's father's grave. After creating a haiku at the grave, you can bow down to it as it acts as a hidden altar.

Read Also: 'Death Stranding' on PC: How to Remove Black Bars in Ultrawide Setting; See How Hideo Kojima Looks as a 'Cyberpunk 2077' Character