For years, a lot of technological advances happen in Silicon Valley with tech employees and executives wear business casual fashion at all times. However, it seems that was already a thing of the past as tech CEOs seemed to outgrow their usual jeans, t-shirts, and sneakers.

In 2017, Business Insider listed some top tech executives and how they do their fashion. Surprisingly, Facebook CEO Mark Zuckerberg was then at the bottom of the list as he has worn the same set of clothes: jeans, hoodie, gray crewneck shirt, and Nike running shoes.

However, Zuckerberg chucked his casual look for a more business-type look with his well-fitted pair of suit-and-tie as he is seen in important events. 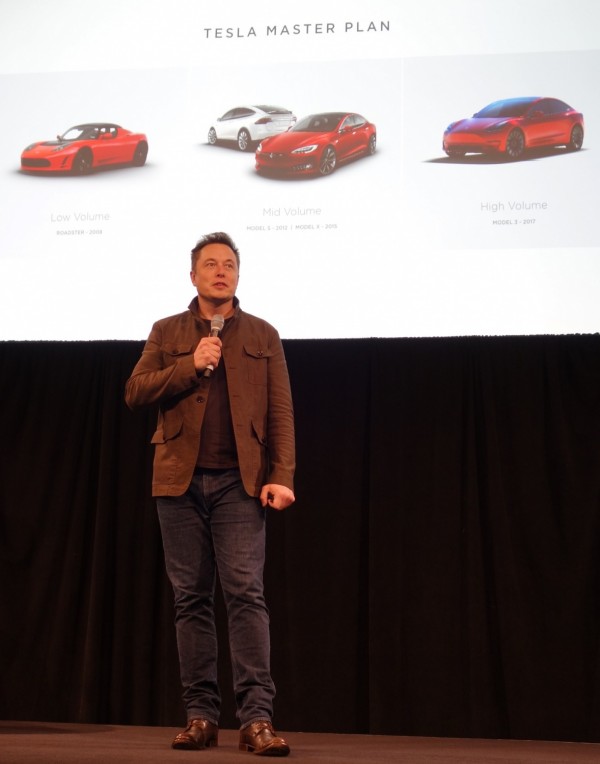 Unlike Zuckerberg, Elon Musk is seen in various looks. While he looks good on his tuxedo, he can also be seen with an Alexander McQueen velvet jacket or in a Tesla graphic tee.

Known as a billionaire, the Business Insider identified Musk as the real-life Tony Stark, even with his clothing style that puts him above many of his colleagues. As the CEO of Tesla, SpaceX, and Neuralink, Musk has been running multiple companies.

This may be the reason for the differences in his looks as he knows the importance of dressing up appropriately when going out in public. This was noted by a Quora user who responded to a question as "Why do Elon Musk and Jeff Bezos not practice wearing the same type of clothing daily like Mark Zuckerberg does?" Another respondent simply answered: "Different strokes for different folks." She also noted that the difference in style is apparent because "Elon Musk and Jeff Bezos aren't Mark Zuckerberg." 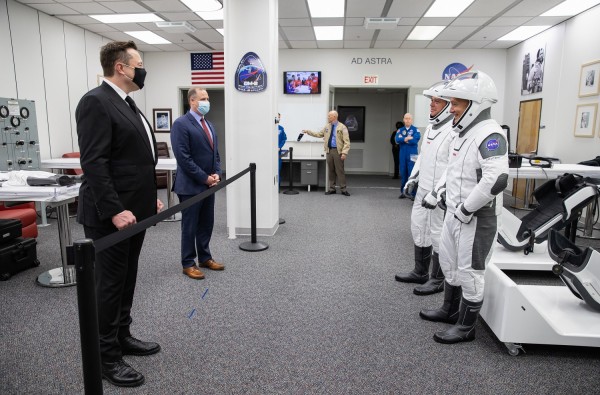 (Photo : NASA/Kim Shiflett)
Behind the rope, SpaceX CEO and Chief Designer Elon Musk (left) and NASA Administrator Jim Bridenstine greet NASA astronauts Robert Behnken (left) and Douglas Hurley inside the Astronaut Crew Quarters in the Neil A. Armstrong Operations and Checkout Building at NASA’s Kennedy Space Center in Florida ahead of the agency’s SpaceX Demo-2 mission. The launch, initially scheduled for May 27, 2020, was scrubbed due to unfavorable weather conditions around Launch Complex 39A. The next launch attempt will be Saturday, May 30. Liftoff of the SpaceX Falcon 9 rocket and Crew Dragon spacecraft is scheduled for 3:22 p.m. EDT from historic Launch Complex 39A. Behnken and Hurley will be the first astronauts to launch to the International Space Station from U.S. soil since the end of the Space Shuttle Program in 2011. Part of NASA’s Commercial Crew Program, this will be SpaceX’s final flight test, paving the way for the agency to certify the crew transportation system for regular, crewed flights to the orbiting laboratory.

Similarly, Jeff Bezos went through a style revamp three years ago, which somehow reflects the style update in Silicon Valley.

Like Musk, the Amazon CEO's fashion sense came a long way. He seems to be into health and wellness nowadays as he is seen in slim-fit suits, high-end sunglasses, tight polos, and t-shirts. He also matches his looks with cool outwear like jackets and vests. His new looks prove he now puts attention on how his clothes look and feel.

How to update the Silicon Valley-style

For seven years of working, Stylist Kimberly Gant's clientele includes tech workers and executives from startups and tech companies in Silicon Valley. Many of these elites think that sporting the right pair of kicks suggests creativity, exclusivity, power, and casualness. She noted that Bay Area workers are now more aware of how they want to present themselves.

(Photo : Ontario Images/Wiki Commons)
How to update your style to suit the Silicon Valley lifestyle

Well-fitted jeans is a must

Having a pair of jeans that do not fit is distressing, so Gant advised finding a tailor or brand that suits the body type. She also suggested paying attention to fabrics of the garment, which may feel nice in the dressing room, but does not give the right fit.

Focus on the color and quality of the garments

To look good and confident, people must understand what colors look good on them. Also, they must focus on the quality of the product and properly taking care of them.

For many tech execs, getting pairs is an important part of their style. This is why we see Zuckerberg or Musk on their sneaker, which is not also comfortable to wear but also shows off a lot of character. Changing shoes is the easiest way to update a person's wardrobe.

Gant urges people to seek professional help when they feel like updating their look. One does not need to be a billionaire to do so, but top executives should be careful of how they look in public because it says much about their character and how they do business.

"While style can be super analytical, there is an art to it too," Gant added.

Read also: Tesla Epic Moment? Watch How This Driver Tries to Fill His Tesla With Gas; Here's What to Do if your Run Out of Power?