[Fact Check] Did This Woman in The Viral SF Road Rage Video Spit on Someone's Face and Say the N-Word?

When it comes to a caught-on-camera moment in San Francisco involving a couple in a sedan, and a Black guy in silver Mercedes in a heated argument, there's more than meets the eye. 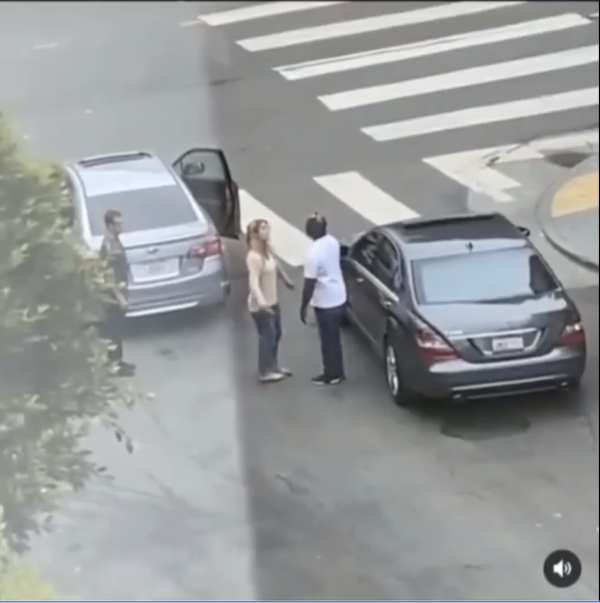 A Latina woman who doesn't want to disclose her name took a viral video this week at the intersection of Bay and Stockton Road in San Fransisco, California.

While the video was taken from an apartment window that accounts for muffled audio, it is clear that the woman is yelling at the man at close range, with no mask on. The situation drew flak online.

Looks are really deceiving, even online!

The man responds at one point, "get out of my face, expletive!" However, the looks can be deceiving. He clarified the woman did not spit on the man with Mercedes.

Carlton, the Black man in the silver Mercedes Benz, clarified that everything would have been a "different ballgame" if the woman had spit on him. He added the woman just "coughed" instead of spitting. "It was more of a cough than spit," he continued.

He claims the couple in the other car tailgated him and got out at the stop sign. Yet after hearing the woman accuse him of not being able to afford his car, she did not view the remark as overt sexism.

She claims that the barrage of social media messages does not reflect what happened. Carlton made one thing sure: The woman on the viral video never said the N-word and anything racial and slur to him, and nor did he.

He, however, admitted he was in the wrong for aggressively responding. "I hold myself responsible for not defusing the situation which is what I should have done," said Carlton. He added he was just as guilty as she was.

Carlton claims he wasn't spitting at the woman either. He doesn't want the woman to suffer the repercussions that others have in similar videos.

"I don't want to see fire on anyone," Carlton said.

ALSO READ: [Fact Check] This Viral Photo of 'Human-Sized' Bat is Real: Guess Where It Can Be Found

Always think before you act; you might go viral online!

This experience is about accountability for both Carlton and the woman. They recorded the incident and keeping a record, just in case.

"When the police turn up who gets into trouble?" the Latina woman asks. She underscored the importance of having more room and grace for oppressed people, particularly Black people, during a time of racial re-trauma."

For other people of color who might one day be in the same awkward position, Carlton has this message. "Just think before you act because [you will never] know who tapes particularly this day in time," Carlton said.