Marvel Cinematic Universe or MCU as fans fondly call it is best known for its post-credit scenes, basically a snippet of what people can expect in the next movie or the first Avengers movie, what happens after the movie. 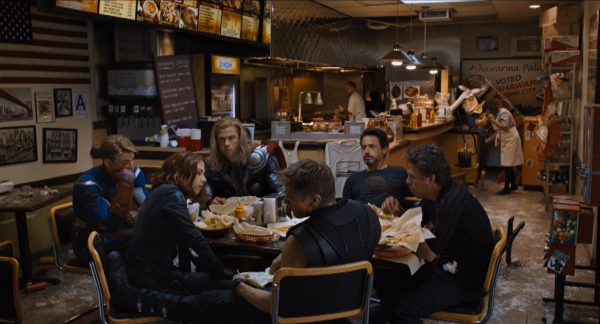 (Photo : Avengers/Facebook)
The iconic scene was shown after the credits of the first Avengers movie.

In the now-iconic scene, we can see the original Avengers enjoying a shawarma meal after saving the world from hordes of aliens that Loki brought to Earth.

There is nothing exciting as we see the exhausted heroes eating their shawarma in peace because after all, they're practically humans (or god) and they get hungry, too, especially after the intense fight and with Tony Stark aka Iron Man (Robert Downey, Jr.) almost dying.

Fun fact: the scene was added last minute and was filmed after the film's premiere, which is why it wasn't available during the first screening.It was also why Chris Evans, who plays Steve Rogers, aka Captain America, was covering his mouth as he had grown a beard.

Years after the scene was shown, an MCU fan decided to reunite the original Avengers for another shawarma meal--only this time, they happened after the events of Avengers: Endgame and we're missing (pun intended) Natasha Romanoff aka Black Widow (Scarlet Johansson) and Stark.

According to ScreenRant, fan art was made by the Instagram user and digital artist Abhinav.

The heartbreaking fan art shows Thor (Chris Hemsworth), Hawkeye (Jeremy Renner), Hulk (Mark Ruffalo), and an old Captain America back on their table like they did the first time.

The artist then purposefully left the seats of Black Widow and Iron Man deserted. The characters looked at the chairs, sad, pondering how the two heroes have sacrificed their lives to defeat Thanos (Josh Brolin) and undo the snap that wiped half of the universe's population.

Although Steve Rogers did not die, he ended up returning to his first love Peggy Carter (Hayley Atwell), after returning the Infinity Stones to their original timelines.

By the end of Endgame, Rogers can be seen as an older man and giving up the infamous shield to Sam Wilson, aka Falcon (Anthony Mackie), who will now wield the shield in the upcoming Phase Four of MCU, which was delayed due to the COVID-19 pandemic.

After Endgame, it's not certain whether fans would see the original Avengers again, save for Thor, who went with the Guardians of the Galaxy and who we will likely see again, as well as Hawkeye, who will have his own series.

However, fans aren't certain whether the Hawkeye series will come to fruition as, according to We Got This Covered, the series has been indefinitely delayed.

The movie was initially set to be shown this May and then moved to November 2020 due to the pandemic, opening MCU's long-awaited Phase Four.