October is nearing and the world's most valuable technology company, Apple, is anticipated by fans, customers, and techies across the globe for the up and coming release of the beloved smartphone line, iPhone 12. A recent leak by a YouTuber shows the most genuine iPhone 12 reveal and first look.

The multinational technology company, Apple, still makes its beloved smartphone details and launch a secret. No official statement or news comes from Apple regarding the new phone line-up that is set to launch in September according to an e-mail leak that a carrier network sent out to customers.

Apple's iPhone 12 release are all confirmed and made known by leaks, and the world's most valuable company does not do anything to plug and stop those leaks once and for all. Another set of details about the company's 'Apple One' bundle reveals the availability of the phone and iOS 14 software in October.

Now, a new report from 9 to 5 Mac, shows a YouTuber's tweet about the most genuine leak of the iPhone 12 that shows its 'chassis' or rear shell, portraying the phone's first and actual look. The phone is a 6.1 inch iPhone 12 that is known to be the entry-level or base variant of the new release.

Filip Koroy, also known as Everything Apple Pro, posted a video on Twitter (@EveryApplePro) that shows his literal hands-on feature of the iPhone 12 rear shell. The tech vlogger and known Apple enthusiast broke down the iPhone 12 and shown the public its internal components.

The video by Koroy shows a stripped-down iPhone 12 without the LED screen and front components. The smartphone's rear shell only shows the internal components, with the all-new LiDAR placement and 5G antenna. The back shell of the new Apple phone also sports the same three-camera configuration that is found on iPhone 11's pro versions. 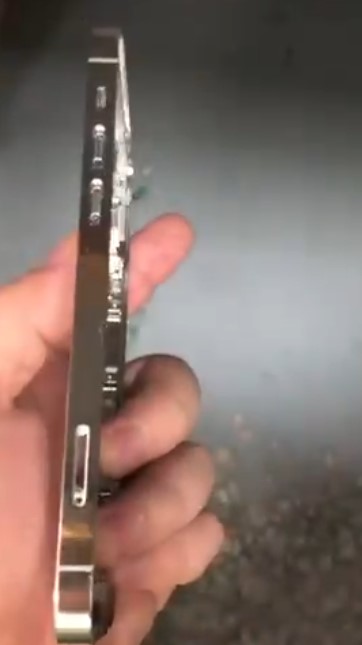 Apple already confirmed a particular virtual event that will reveal the iPad and Apple Watch Series 6. However, fans still anticipate next week's event to most likely drop hints and give a teaser for the iPhone 12. Apple sticks to its October launch date for the new iPhone and keeps the public on the edge of their seats.

Fans are eager to know what the iPhone 12 will bring new to the market, along with the latest 5G capabilities of the iPhone. The video by Everything Apple Pro shows a cutout for an antenna which will be 5G's allocation. Magnet cutouts are also seen on the video and highly suggests a more advanced iPhone 12, compared to older smartphone line-ups.

LiDAR is the light detection and ranging technology that uses an active remote sensing method that measures the exact distance of an object to the planet's surface. Apple will release four variants of the iPhone with two sizes for the base model, iPhone 12 and 12 Max/Plus, and another two for the pro versions, iPhone 12 Pro and 12 Pro Max.

ALSO READ: [Leaks] Apple Gears up for iPad and Apple Watch Drops This week-iPhone 12 Will Get Its Schedule!