The British prime minister, Boris Johnson, committed $207 million (£160 million) to upgrade factories and ports in Scotland, northern England, and Wales by building wind turbines. On Oct. 6, at the Conservative Party conference, Johnson declared that the United Kingdom would become "the world leader in clean wind energy." 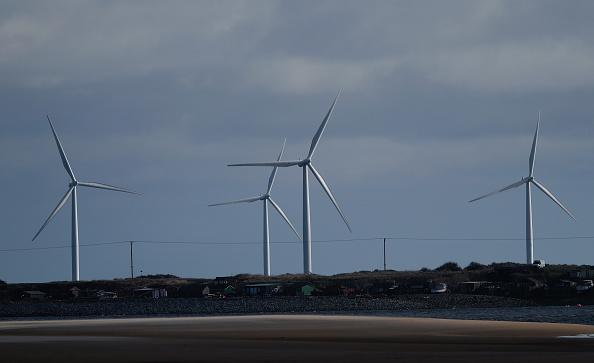 (Photo : Photo by Ian Forsyth/Getty Images)
The offshore windfarm near Redcar is seen from onboard the boat, High Tide Adventurer on the River Tees on February 23, 2017 in Middlesbrough, United Kingdom. The boat is named after the High Tide Foundation, a charity formed by PD Ports who aim to raise aspirations and awareness of job opportunities in this sector for young people on Teesside. It is used to provide trips along the river to young people and potential businesses offering a unique perspective on Industrial Teesside. PD Ports is a shipping and logistics company based on the River Tees and helps to support the international and coastal movement of goods in and out of the north of the UK. It has recently been shortlisted for Port Operator of the Year.

The prime minister's plan serves as a hope for those who lost their jobs in the dying fossil fuel industry since it aims to build 2,000 clean energy construction jobs and support 60,000 more. The government is also boosting its target for offshore wind power capacity from 30 to 40 gigawatts by 2030.

Also Read: Elon Musk Hypes up "Battery Day" on 9/22: Could Tesla have been Secretly Manufacturing Batteries As Well?

Johnson added that within 10 years, offshore wind farms would be able to power every home in the country.

"Your kettle, your washing machine, your cooker, your heating, your plug-in electric vehicle - the whole lot of them will get their juice cleanly and without guilt from the breezes that blow around these islands," he said.

Johnson's announcement is the first stage of the U.K.'s 10-point plan

The British prime minister's announcement is the first stage of the government's 10-point plan for a "green industrial revolution." Other parts of the program are expected to be announced later this year of 2020.

(Photo : Photo by Mark Brake/Getty Images)
Wind Turbine on the way to Tesla Powerpack Launch Event at Hornsdale Wind Farm on September 29, 2017 in Adelaide, Australia. Tesla will build the world's largest lithium ion battery after coming to an agreement with the South Australian government. The Powerpack project will be capable of an output of 100 megawatts (MW) of power at a time and the huge battery will be able to store 129 megawatt hours (MWh) of energy. Tesla CEO Elon Musk has promised to build the Powerpack in 100 days, or he will deliver it for free.

An independent Think tank Green Alliance's climate department's head, Caterina Brandmayr, said that Johnson is right that the best way to create jobs in every part of the U.K. is a green recovery project. She also explained that it could lead the world in tackling climate change and protect the world.

"The race is now on for the government and British businesses to replicate the success story of the offshore wind in electric vehicles, smart grid technology, and future-proofed homes," she added.

For more news updates about other plans for clean energy sources, always keep your tabs open here at TechTimes.

Also Read: Elon Musk Notes Wind and Solar Energy is Cheaper than Sending a Big Fusion Reactor in the Sky