Halloween is getting near. But since we're facing pandemic, things may not be the same as last year's. If you still want to have a creepy Halloween night, here's a Halloween 101 tip, straight from Patricio Ferrel, the set designer of the popular horror Netflix series The Haunting of Bly Manor.

How to get extra spooky on Halloween? 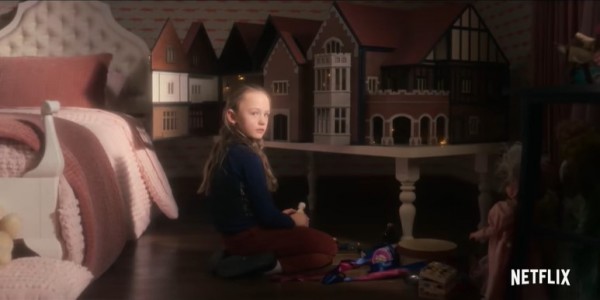 (Photo : Screenshot from: Netflix Youtube Page )
Netflix's 'Haunting of Bly Manor' Halloween Tips 101: How to Build Your Own Haunted House

This is the second entry for The Haunting series that is based on the 1898 horror novella titled The Turn of the Screw by Henry James.

The series focuses on Dani Clayton, a young American woman hired as the new au pair or helper for a brother and sister who lost their parents and live at Bly Manor. Once she went inside the manor, she found out snippets of chilling truth about the house and the hidden secrets living in the manor.

One of the most eye-catching details on the show is not just the creepy eerie vibe of the people inside the manor, but mainly the haunted manor set itself.

In an interview on CNet, Patricio Farrell, set designer for The Haunting of Bly Manor, talked about how he managed to create the creepy look on the haunted house.

Surprisingly, Farrell admitted that he did not think about making the manor creepy to live in. He actually thought of designing it like a house, that everyone would like to sleep at.

In his own words, "I'm not trying to make a spooky house."

ALSO READ: The Universe Has a Halloween Treat as Rare Blue Moon Will Rise on Oct. 31

How Bly Manor was built?

(Photo : Screenshot from: Netflix Youtube Page )
Netflix's 'Haunting of Bly Manor' Halloween Tips 101: How to Build Your Own Haunted House

As said, Farrell did not design the manor to look haunted from the outside or inside. In designing the Bly Manor, the renowned set designer has jumped to look for architectural designs in Scotland, or anywhere in Europe.

Since the show should be set in 1980s, the set design team needs to look for everything that is old or old-looking in order to match the show's antique vibe.

Tha basement and attics, according to Farrell, are places that are already creepy so it doesn't need to be flawlessly designed on the show.

"We relied on a lot of wainscot and wallpaper everywhere, and [were] always trying to find wallpaper that either had or could be like it had a face," Farrell says.

In conclusion, the Bly manor isn't exactly built to become a horror house. Maybe that's the secret of a perfect haunted house.

ALSO READ: VIRAL: Among Us or Spacemen? Reddit's Halloween Costume Idea Can Also Protect You While Trick or Treating!

ⓒ 2021 TECHTIMES.com All rights reserved. Do not reproduce without permission.
Tags: Halloween The Haunting of Bly Manor The Haunting Pandemic Netflix
Most Popular