After Gal Gadot announced on Sunday, October 12, she will star in the next epic movie Cleopatra, the Israeli actress received outrage on social media from users who thought the queen was North African and black.

After Paramount Pictures won the bidding war between movie giants Warner Bros. and Universal as well as streaming companies Apple and Netflix, the 35-year-old actress confirmed she got the title role. 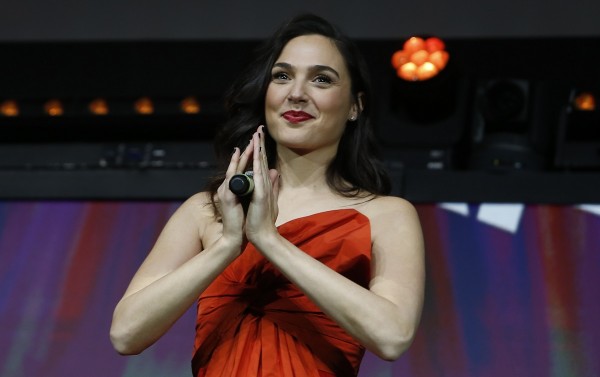 The actress shared on her Instagram a screenshot of a news article about her new team up with Patty Jerkins after the success of Wonder Woman in 2017. "Cleopatra is a story I wanted to tell for a very long time. Can't be more excited and grateful," she said on the post.

View this post on Instagram
I love embarking on new journeys, I love the excitement of new projects, the thrill of bringing new stories to life. Cleopatra is a story I wanted to tell for a very long time. Can’t be more excited and grateful about this A team !! @paramountpics #PattyJenkins @jaronvarsano #LaetaKalogridis @pilotwavemotionpictures @atlasentertainment A post shared by Gal Gadot (@gal_gadot) on Oct 11, 2020 at 9:48am PDT

Gadot also shared that she loves to take-off on new journeys. "I love the excitement of new projects, the thrill of bringing new stories to life," she added. While it is not clear how Laeta Kalogridis would tackle the story of Queen of Egypt, but her past screenplays include some epic movies as well like Alexander (2004), Leonardo Shutter Island (2010), and Terminator Genisys (2015). 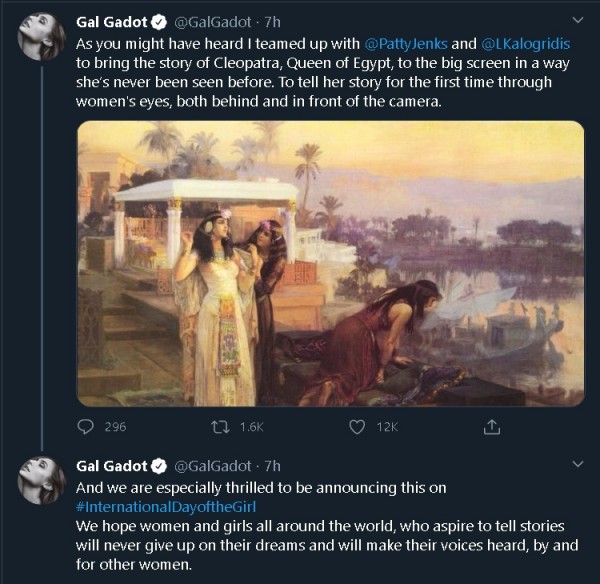 However, some social media users received the news with distaste as they think Gadot was inappropriate for the role. They suggested that the role should instead be given to a black or African actress.

Twitter user Sameera Khan questioned the decision of Hollywood to cast Gadot whom she called "bland looking" over Nadine Njeim or other "stunning Arab actress."

Which Hollywood dumbass thought it would be a good idea to cast an Israeli actress as Cleopatra (a very bland looking one) instead of a stunning Arab actress like Nadine Njeim? And shame on you, Gal Gadot. Your country steals Arab land & you’re stealing their movie roles... smh. https://t.co/GY5tYEcl4K pic.twitter.com/JcrnM1RUQq — sameera khan (@SameeraKhan) October 11, 2020

Other users mocked those who complain against the Gadot starrer as they pointed out that Cleopatra was either Persian or Greek. "People are upset because Gal Gadot, who isn't black, is playing Cleopatra, who wasn't black either," Journalist Ian Miles Cheong noted.

Born in Egypt, Cleopatra was a member of the Macedonian Greek royal family as Pharaoh Ptolemy XII's daughter. She was most probably to be fair-skinned like how Roman and Ptolemaic goddesses were depicted with ivory skin in paintings and books.

"Cleopatra was NOT black, she was of Greek descent, and there are even effigies of the time on how she looked like," another user shared adding that people should "stop trying to rewrite history with the SJW stupidity of today."

I'm going to say this once and I'm not going to say it again, Cleopatra was Greek. Yes, she was in Egyptian ruler but she was Greek with Persian and Syrian ancestry. The people who are reacting negatively that to this are uneducated and uninformed. Gal Gadot deserves this role. pic.twitter.com/7h1oYu9ClX — The Moonlight Warrior (@BlackMajikMan90) October 11, 2020

Known as ancient Egypt's last ruler of the Ptolemaic Kingdom, Cleopatra died in 30 BC. She ruled Egypt for more than three decades: with her father, two younger brothers, and her son.

Meanwhile, Gadot and Jenkins first team up, Wonder Woman, became the highest-grossing live-action movie by a female director. While the COVID-19 pandemic still putting a halt on the release of its sequel, Wonder Woman 1984, this new high profile project is great news.

Read also: Netflix's 'Haunting of Bly Manor' Shows How a Haunted House Is Made Using Creepy Lighting, and More