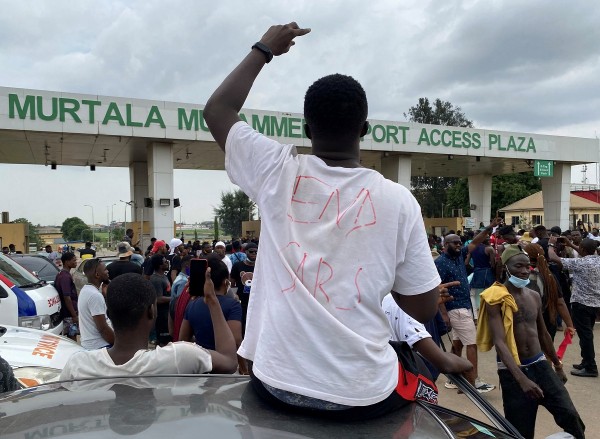 (Photo : REUTERS/Seun Sanni)
"End Sars", referring to the Special Anti-Robbery Squad police unit, reads on a demonstrator's t-shirt sitting on a vehicle during a protest over alleged police brutality in Lagos, Nigeria October 15, 2020.

The NBC is the Nigerian broadcast industry's regulatory body, which receives, considers, and processes applications for ownership or operation of television and radio stations, which also include direct satellite broadcast and cable television service.

It is alleged that NBC's website was also inaccessible, but as of this writing, Tech Times was able to get in to the commission's site. The commission claims it utilizes scientific research methods to collect data and analyze trends about the dynamism of the media industry.

The NBC takeover followed the Anonymous group's earlier hacking of "multiple government websites" on October 15 in support of the protests against police brutality.

"Anonymous hacks multiple government websites in solidarity with #EndSARS protestors and retribution for violence by police," the hacking group tweeted, although did not indicate the hacked websites. However, Nigerian police's website became inaccessible at 12:21 am on October 15.

Then, a dedicated Twitter account @OPNigeria was created by the hacking group on October 12. In a tweet, the group warned the government "We're watching you" after the new SWAT police unit was formed to replace SARS.

Aside from sharing confidential government documents containing police information, there were also companies, which allegedly had deals with the government. In another tweet, OPNigeria said: "You got paid for [these] contracts but never delivered the job, received billions but spent nothing."

On October 11, the government gave in to protesters' demand as it announced SARS will be disbanded while the new Special Weapons and Tactical Team unit will be formed. However, the former SARS members will undergo psychological tests before they join other police departments.

In a statement issued on Friday, October 16, by Nigerian Police Service Commission spokesman Ikechukwu Ani, 37 former SARS members are recommended to get dismissed from service while 24 of them will be charged with professional misconduct.

The recommendations were the highlights in the report presented by PSC Chairman Musiliu Smith before the Presidential Panel on Reform of the Special Anti-Robbery Squad. The panel, which probed on abuses and human rights violation allegations against the unit, was set up by the Nigerian government in 2018.

The nationwide protests to abolish SARS began on October 8 after a video of an alleged shooting of a young man by a SARS officer in a hotel in Lagos was shared in social media on October 3. The footage taken by hotel guests showed two men being dragged out of the hotel

This triggered netizens from posting stories of alleged abuses of the SARS unit using the hashtag #EndSARS, which trended globally. People also went out to call for the disbandment of the controversial unit.

However, the police responded by throwing water cannons and tear gas, and even shooting at demonstrators, which killed at least four of them while armed men attacked protesters.

Human Rights Watch (HRW) researcher in Nigeria Anietie Ewang noted that the public was just exercising their right to protest while asking to put an end to police brutality. "This underscores the importance of the protesters' demands and the culture of impunity across the policing system, which is in dire need of reform," Ewang said in the HRW website.

Related article: UPDATE: Twitter Down! Was it Hacked? Support Says 'NO Evidence'