The year is about to end, and with the holidays and New Year coming, many people worldwide are hoping for the end of the COVID-19 pandemic, which began circulating early this year from Wuhan, China. 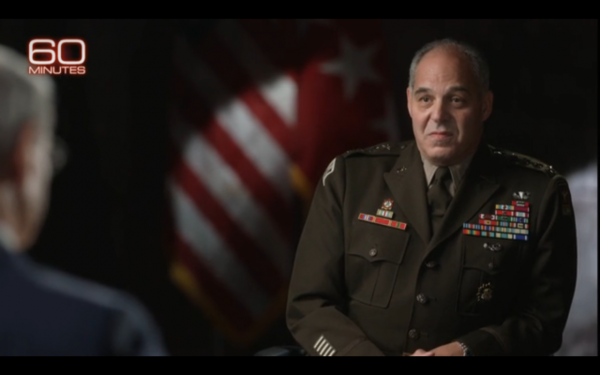 (Photo : Screengrab from 60 Minutes / CBS News)
General Gus Perna was interviewed by 60 Minutes where he shared his goals and fears about OWS.

Since then, scientists from around the world have been trying to come up with the most effective and safest vaccine that they can deliver to affected countries, including the United States, which is on top of the list of the countries with most cases.

Aiming to Bring COVID-19 to Millions of Americans

In May, the then-US President Donald Trump appointed General Gus Perna, who was only two months from retirement, to be the head of the Operation Warp Speed.

According to a report by the Daily Mail, the operation was the largest and the biggest vaccination program in the world, with $12 billion already spent and might even increase in the coming months of up to $26 billion in order to vaccinate around 300 million Americans against COVID-19.

In an exclusive by "60 Minutes," the news showed footage of vials being filled with the vaccine in their facility in Baltimore, with a speed of 400 vials a minute, and each vial enough for five to 10 dosages.

CBS News reported that the operation is stockpiling the anticipated vaccines from six different vaccine makers.

The general in charge of the government’s effort to get a COVID vaccine to 300 million Americans says his worst nightmare is, “we get vaccines to the American people, and they don’t take them. Shame on us.” https://t.co/78gm8Ahgc3 pic.twitter.com/s6FuBnBgSq — 60 Minutes (@60Minutes) November 9, 2020

According to Perna, his team is ready to distribute the said vaccines as soon as the Food and Drug Administration (FDA) approves of the vaccine, with Pfizer, one of the leading companies in the vaccine race, expected to get the FDA approval as soon as next month.

Nevertheless, the general hasn't exactly specified which COVID-19 vaccines are being produced in the facility.

Based on the report, the vaccines will be transported via private companies that partnered with Operation Warp Speed, including UPS, FedEx, and medical supply firm McKesson, and wherever the vaccines go, the armed guards will be following them, much like how the Baltimore-based facility is being heavily guarded 24/7.

However, Perna said that the logistics nor the vaccines' production is not what is keeping him up at night--instead, he worries about public sentiment and fears Americans won't take the COVID-19 vaccine.

"We get vaccines to the American people, and they don't take them. Shame on us," Perna said. "'Hey, I was already sick, I don't need it.' Shame on us. 'Hey, I don't believe in vaccines.' Shame on us. Just shame on us, and it does keep me up at night."

A poll completed by Pew Research last September showed a staggering 51% of American adults said they wouldn't get a COVID-19 vaccine if one is to become available today.

Although the number decreased from 72% back in May, it is still an alarmingly high figure.

Experts believe the misinformation with regards to vaccines, with anti-vaxxers saying vaccines cause disabilities in children, as well as the many conspiracies surrounding the COVID-19, contributed to the public's doubt.