The community-created Android for PC Bliss OS (x86) recently announced that it would now support ARM 64 Emulation and Magisk Support on its platform to integrate the smartphone software better. The software platform enables Android applications to run smoothly with the keyboard and mouse combo of computers, which are not widely supported. 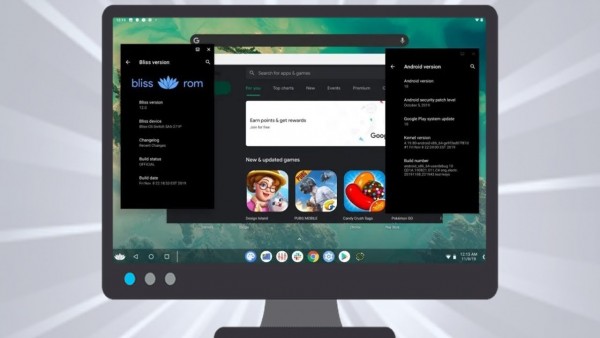 Google's popular smartphone operating system widely-used by massive phone brands, Android, can now integrate itself into personal computers and function as it is with a keyboard and mouse. The integration is thanks to Bliss OS's open-source platform widely available for everyone.

According to XDA Developers, contributor "electrickjesus," a.k.a. Jon West on Twitter, recently announced the new update version of Bliss OS with the 11.12 and 11.13 performances. The latest versions bring support for Google's Android Architecture known as "ARM64" and Magisk.

You all asked, and we delivered. Announcing new Bliss OS 11.x builds that bring ARM64 emulation, Gearlock updates, and even Magisk to the mix, as well as a ton of other things. Be sure to checkout the update post on @xdadevelopers, https://t.co/anqFUOAjEP pic.twitter.com/EWjESqXToF — Jon West (@electrikjesus) November 14, 2020

The new software version of Bliss OS could turn x86 computers into a working Android-run PC, making it run on a popular Android application package, also known as APKs. The Bliss OS can run any Android apps or games; for example, is Jon West's (@electrikjesus) trial of "PUBG Mobile" and Innersloth's "Among Us."

Here are just a few of the games we've tested so far on the new Bliss OS 11.x builds with ARM64 emulation @theetaprime , you should try these builds out on some of your stuff soon pic.twitter.com/tjfpW9J22J — Jon West (@electrikjesus) November 14, 2020

Bliss OS' latest addition is acting like Chromebook OS as it uses a native system that can run APK and Android Apps on its platform despite being packed inside a keyboard and mouse-reliant device. Most Android ARM 64 Apps would work with Bliss OS, but several "armeabi-v7a" apps are still faced with several issues.

Despite the developers and website recently confirming and releasing Bliss OS' Latest 11.12 and 11.13 versions, Jon West teased a new software version for the OS as "coming soon" for computers. The next major upgrade would be called "Bliss OS 14," which jumps three numbers from its current versions.

A few more screens to get you going :) pic.twitter.com/HYZiCCYqhT — Jon West (@electrikjesus) November 25, 2020

Not much surfaced as the revelation of the new version of the Bliss OS was announced by one of its developers. There is also no known news regarding the succeeding versions,12 and 13, and its release (or if there would be any).

The update would feature new gestures and options for users to choose from. This new version would improve more than the latest release and pick-up where it left off. However, there is no news or updates regarding what the Bliss OS 14 would bring new to the platform.