A new video was released, revealing how the Arecibo Observatory, the world's largest telescope, collapsed in the jungle of Puerto Rico. It showed that the main cables snapped first before sending the giant platform to the ground, leading to its demise. 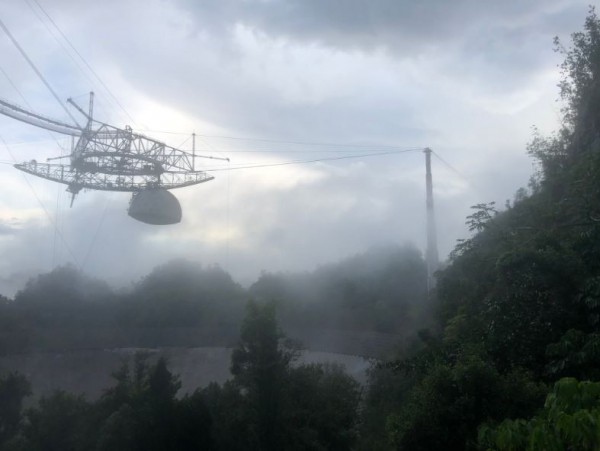 (Photo : Screenshot from Twitter post of @7838208)
New Drone Footage Reveals How Arecibo Observatory Sways and Then Collapsing To Its Demise!

Legit a exactly year ago today (on my birthday!!) I moved to Puerto Rico and started working at the Arecibo Observatory, and now the telescope has collapsed :(((
It all feels unreal. Here’s the last photo I took of the telescope before collapse pic.twitter.com/8v1T4PhSlZ

Drones were used to observe and investigate the cables around the huge telescope. The machines, which are capturing footage around the area, were able to record how the restraints failed and dropped the 900-ton platform onto the reflector dish, 400 feet or 121.92 meters below.

According to the Daily Mail, one of the footages revealed that the Arecibo Observatory telescope swayed in the air before letting out a loud sound as it was separated from the supporting cable and snapping into pieces as it dropped.

The National Science of Foundation or NSF released the footage, which shows two different views of the accident. The first video shows the platform still attached to the cable. It revealed that the main cable snapped from one of the three surrounding support towers. 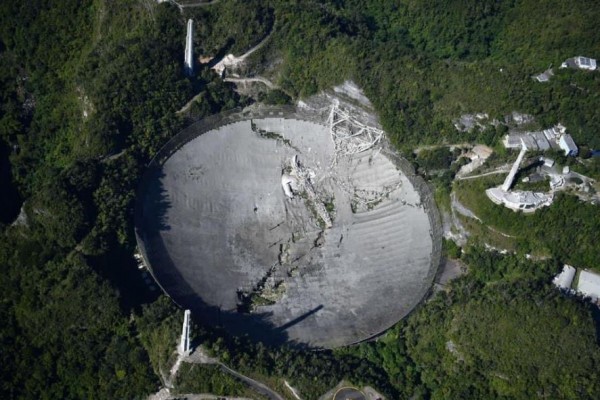 (Photo : Screenshot from Twitter post of @mmelendez-o)
New Drone Footage Reveals How Arecibo Observatory Sways and Then Collapsing To Its Demise!

I remember the joy this brought me when the school took us on field trips to the Telescope at Arecibo Observatory in Puerto Rico. This icon fell overnight on December 1, 2020. pic.twitter.com/JAQRuSWouP

It then breaks away from the cable, disappearing from the frame after it shattered. The second video provides a close-up look at the main cable breaking from the top of Tower 4. It also showed that the two cables are now missing after they failed to support the huge telescope.

Puerto Rican scientists are now trying to rebuild it

According to NBC News, Puerto Rican scientists are now making efforts to rebuild the world's largest telescope after it was destroyed. One-hundred-forty students and science professionals are now joining forces to begin the "Save the Arecibo Observatory" movement on social media after the NSF announced its plans to decommission the observatory.

STEM Puerto Ricans, a coalition of Puerto Ricans in the mainland and on the island working in the fields of technology, engineering, science, and math, created a movement to gather more than 66,000 signatures in less than two weeks.

This new petition is currently asking the White House to save the observatory after the tragedy. The groups are now refocusing their efforts on getting help from the U.S. Congress to rebuild the destroyed giant telescope. As of the moment, the organizers of the "Save the Arecibo Observatory" movement are now asking the U.S. Congress to provide funding to build a new Arecibo radio telescope. However, this time, they are expecting that it will have greater capabilities than the previous model.