NASA's Skywatching January 2021 Forecast PLUS Best Telescopes to Use

2021 has much to offer for skywatchers. According to astro predictions, Earth's closest predicted proposition to the Sun called perihelion, will happen at the beginning of the year. For this year, it is also expected to see a couple of hard-to-spot planets such as Uranus, which is predicted to appear on January 20, and Mercury, which is expected to appear in late January.

Here's what we've learned so far:

Earth's approach in close proximity to the sun called perihelion, will display our planet in just about 91.5 million miles away from the sun. This event will happen anytime at the beginning of the year. Uniquely, 2021 also holds the moment when earth is farthest from the sun called "aphelion" which happens on July 5. It's important to remember these dates to be able to observe the changes that these events will bring.

January 20 may be an exciting time for those who have access to telescopes. It can be an easy opportunity to view the lucrative planet Uranus. Without the use of a good telescope, it can be very difficult to spot the planet. It may just look like a faint dot due to its very far distance away from the earth. To easily spot its location, note that Uranus will be spotten right at the center of the Moon and Mars. These will be your guides to find Uranus. Look for a crescent and a Red planet. In the middle, the faint blue planet Uranus should be spotted.

In the later days of January, Mercury, the fast moving planet will be gracing the site of Earth's atmosphere. In the beginning of the mid-month, be keen in watching the skies after sunset. In the innermost planet, you'll see Mercury appearing a few degrees about the horizon in the west. Mercury goes faster around the sun as compared to the earth.

Our Top Picks for the Best SkyWatching Telescopes for 2021

According to NASA, it's best to await these happenings with a good set of binoculars or telescopes. These equipment will allow you to better appreciate the site of the planets. Without these, it may still be possible to observe the events, but the planets won't be as clear. 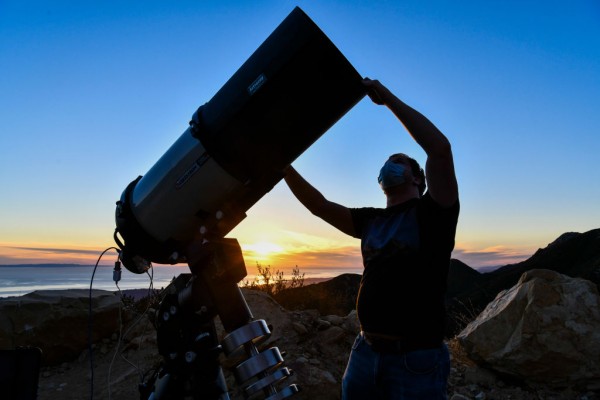 If you don't have telescopes yet, and you're planning to buy one, take heed from our top telescope picks for the year 2021.

It may be overwhelming to choose a telescope right now, due to loads of choices and accessories in the market. According to Smarter Living, you need to consider these important factors first before purchasing a telescope:

There is no one-size-fits-all solution as there are different telescopes that suit different needs. There are reflectors, refractors, and catadioptric telescopes that aim to target different results. Having thorough research can help narrow down your options. Once you have figured these out, it can be easy to find the best telescope for you.

The SkyWatcher Explorer 130M is a mid-range motorized option that is suitable for a wide range of abilities. It is also fairly priced considering its built, an aluminum tripod, and multi-speed handset that is already included. If you're still new, this can be the best option. It claims to be a great choice for all levels of stare gazers. Its core specs includes a a 900mm focal length and an f/6.92 aperture. Its flexibility allows gazers to track planets in the sky using its Right Ascencion and declination coordinates. It's a great deal for beginners and veterans alike.

If you're looking for a premium and modern telescope, the Celestron 22203 AstroFi Wireless Reflecting Telescope may be a great choice foryou. It has an integrated Wi-Fi system, with an available app for both iOS and android, and packed with the latest technology. Of course, it is a bit pricey compared to the first option, but it also has a great deal for its price since it comes with eyepieces, and an accessory tray.

It has a 130mm and two 1.25 inch eyepieces provides a clear view of the planets and the moon. There's also a place intended for your smartphone or other accessories in the rubber-lined area of the device to use the app. There is even a feature to do a "sky tour" based on the best places to view the celestial objects.

If you're relatively new to the game, the Orion StarBlast II 4.5 EQ Reflector Telescope Kit can be a good starting option. This all-in-one kit for amateurs coems with an observer's guide book and a moon map to help you in your first navigation. It's a great choice for youths or for those who are just new to stargazing. It doesn't require a great deal of money but still provides good results.

It has a 52-degree field of view that allows users to view "deep objects" and other celestial objects in a decent quality. It has 25 mm and 10mm eyepiece with 2x extension lens. It also has a mini LED light that provides users with illumination when needed.

Whether you're new or a veteran in Skywatching, learning a few tips and tricks every now and then can help you give you a great optimal celestial experience.