Snapchat Cameo Selfie: How to Use or Delete It

Snapchat is continuously updating the app, trying to keep up with user's demands. One of the new features got many users excited was Snapchat cameo selfie. However, some are unaware of what it really is. So, we are here to help you out!

Those who are effectively using GIFs in Snapchat can easily get familiar with the Cameo option, which would allow pasting the user's head in over hundreds of videos to choose from. This guide will discuss what Snapchat Cameo Selfie is as well as how to get and delete this feature. 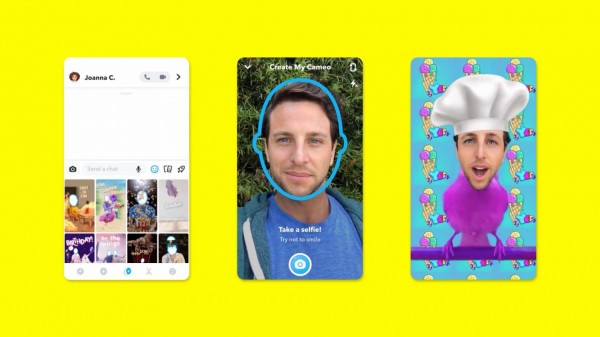 (Photo : Snapchat)
Snapchat Cameo Selfie: A Complete Guide on How to Use or Delete It

What is Snapchat Cameo Selfie?

Users who enjoy using memes and gifs are likely to enjoy the Snapchat cameo selfie, which puts the user's face on various objects within a video such as a dog, cat, or other fun stuff.

According to Republic World, this feature would allow sending a personalized GIF instead of using Bitmoji Avatars. To send this personalized message, look for the Snapchat Cameo option from the imoji section. For users who already linked Bitmoji to their Snapchat accounts, they should be able to find all Bitmoji stickers.

Users can also use this tool and make cameos with friends. With the two-person version, Snapchat users can have some fun experience with their friends.

How to create a cameo selfie:

If Bitmoji stickers have a more powerful influence that the simple smileys, Snapchat Cameos would be the perfect feature. Also, users can utilize Bitmoji Avatar in some relatable situations while Snapchat Cameos will level-up the personalization in every message. Below is how to create a cameo selfie.

How to start a Snapchat Cameo?

Users may find the Snapchat Cameo option beside the Bitmoji at the bottom of the screen. The icon will now show a face with a plus sign. Tap on any video from the Snapchat video collection. With the face perfectly positioned in the frame, take a selfie. However, if the selfie did not come out perfectly, then try taking another photo.

Select the gender and press continue. Users will see their new Cameo in the next screen. If they do not like it, they can always create another by pressing retake selfie. Repeat the process until the Cameo fits the user's liking.

How to prevent others from seeing your Snapchat Cameo?

While it is fun to have a cameo, other users can see it too. Good thing, according to HITC,there is an option to change who can see it. Below are the steps to follow to make the cameo visible only to friends.

How to delete Snapchat Cameo?

Here is how to delete a cameo selfie in Snapchat:

Related article: Windows 10 Game Mode On by Default: How to Disable It