Israel Says Pfizer's Single Dose Is 'Less Effective Than We Hoped,' How Will This Warning Change US, UK Plans?

COVID-19 vaccinations are underway in many countries, including in the United States and the United Kingdom--both countries with high number of cases and deaths--with the Pfizer BioNTech coronavirus vaccine and the Oxford AstraZeneca dosages. 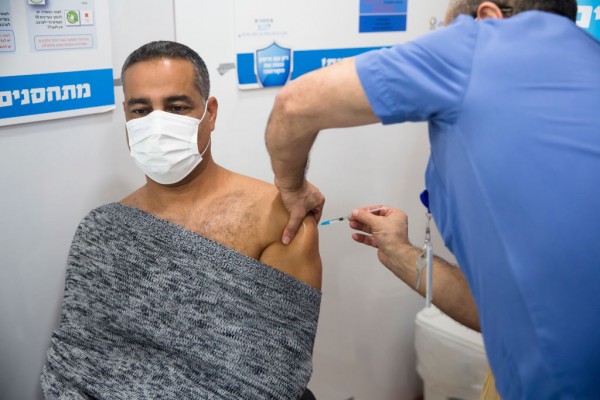 Nevertheless, an Israeli official has warned that the Pfizer vaccine is not as effective as what the public hoped.

In a report by Business Insider, Nachman Ash, the appointed leader against the coronavirus response in Israel, said that a single dose of the Pfizer vaccine is "less effective than we had thought."

According to the report, Ash says that the first dosage of the Pfizer vaccine is only 33% effective.

In context, Pfizer and BioNTech say that the first dosage has an efficacy rate of 52% while taking the second shot would increase that to 95%.

The COVID-19 vaccine is indeed designed to be given in two shots, with the second dosage given after three weeks, as per the clinical trials, and exactly how the country will be distributing theirs, which is deemed as one of the fastest nations in the vaccination program.

Read More: How Sleep Can Help Our Bodies Fight COVID-19

Possible Delays in the US, UK

According to Our World in Data, Israel has already vaccinated 32.4% of its population as of writing, which means they may be able to provide the second dose on schedule.

However, this could lead to certain issues, especially in the United Kingdom as they prioritize giving everyone the first dose of the vaccine, meaning the second shot may be delayed for as long as 12 weeks.

There may also be some concerns within the United States even though incoming US President Joe Biden plans to vaccinate everyone the first and second dosages on schedule, but there could be delays on the second dose as President Biden wants to release all available dosages to maximize the number of vaccinated citizens.

No Strategy Changes in the UK

Sir Patrick Vallance, the chief scientific adviser of the United Kingdom said in an interview with Sky News that they will have to look "very carefully" at the level of protection the British citizens are getting.

Furthermore, Vallance said they would have to "just keep measuring the numbers" of the shots being given to the people.

There is no mention of any strategy changes yet, but the UK official did say that he did not expect the rate to be "as low" as what Ash has claimed, but they did expect that the real-world effectiveness of the vaccine is expected to be lower than in clinical trials.

Scientists from the UK have also said in December that there is reported evidence that the first dose of the Pfizer vaccine would increase to an 89% efficacy rate after 10 days of being vaccinated.

This could mean that the first dose won't offer that much protection against COVID-19 for the first ten days of receiving it.

Besides the Pfizer vaccine, the UK is also distributing AstraZeneca vaccines to its citizens.