Astronauts aboard the International Space Station (ISS) were witnesses to five intense blue jets of light shooting up from thunderstorm clouds into the stratosphere, with each flash lasting mere 10 milliseconds each. 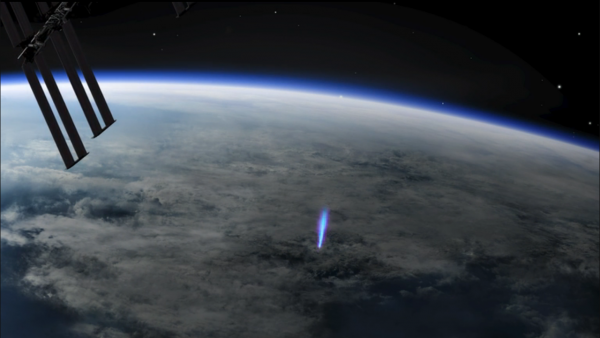 The astronauts aboard the space station describe seeing four of the blue flashes accompanied by a pulse of ultraviolet (UV) light that appears as a rapidly expanding ring.

Meanwhile, the fifth and final flash created a pulsating blue jet, which is a form of lightning that can reach up to 50 kilometers or 31 miles into the stratosphere and only lasts less than a second.

According to the Independent, these blue flashes of light have created the equally astonishing sounds known as elves, which stand for Emission of Light and Very Low Frequency Perturbations due to Electromagnetic Pulse Sources, and are formed by the interaction of radio waves, electrons, and the atmosphere.

Through the Help of ASIM

The phenomenon was spotted near the island of Naru, located in the Pacific Ocean, thanks to the European Atmosphere-Space Interactions Monitor (ASIM).

The device has been installed outside of the European space laboratory Columbus with the purpose of monitoring electric events at a higher altitude, such as the blue lightning-like jets that have been recorded by the ISS crew.

Scientists believe that the observations surrounding the blue jets of lightning with the help of ASIM, fondly known as the space storm hunter, can help them in understanding how lightning is initiated in clouds and how they are influencing the concentration of greenhouse gasses in our atmosphere.

The flashes of blue lights were spotted on February 26, 2019, but the full detail of the observation was only recently published in the scientific journal "Nature."

"This paper is an impressive highlight of the many new phenomena ASIM is observing above thunderstorms and shows that we still have so much to discover and learn about our Universe," said Astrid Orr, physical science coordinator for human and robotic spaceflight at the European Space Agency (ESA).

Orr also congratulated everyone involved in the paper, including the scientists, university teams, and the engineers that built the observatory as well as the people on the ground that are operating the ASIM, saying that it was a "true international collaboration" that has led to such discoveries.

Attaching Devices to the ISS

Such phenomenons are very difficult to observe from here on the surface of our planet, so the ASIM was made and had been able to help scientists find answers little by little.

As per the ESA, in 2018, a collection of photometers, X and gamma-ray detector, as well as optical cameras were added to the International Space Station to help scientists from here on the ground to look for electrical discharges that are created from stormy weather conditions and extend above the thunderstorms into Earth's upper atmosphere.

Since the ISS is at 400 kilometers or around 249 miles above Earth's surface, it's the perfect place to monitor what's happening in our atmosphere.

Artist interpretation of the stunning phenomenon has been added alongside the "Nature" article.