The universe is filled with stunning wonders and we are lucky enough to spot them with the help of the Hubble Space Telescope. Among the most marvelous finds of the space telescope is 1E 0102.2-7219, a remnant of a supernova that the National Aeronautics and Space Administrations (NASA) had been studying for the past ten years. 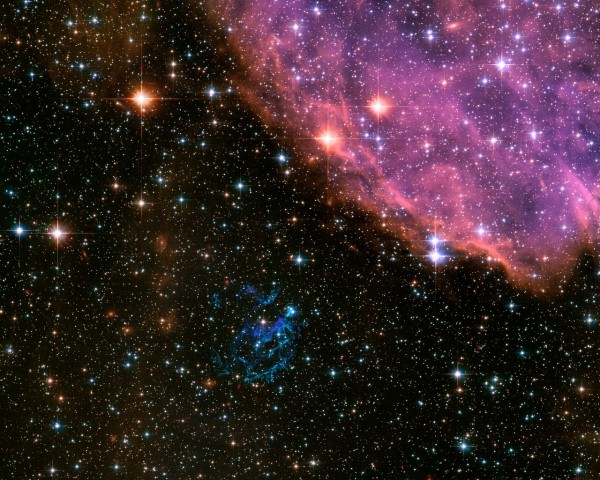 Blast From the Past

According to NASA, the supernova remnant was initially found by the space agency's Einstein Observatory through X-rays.

It is located rather close to use, in a satellite galaxy of the Milky Way known as the Small Magellanic Cloud.

When the supernova remnant was found, researchers began sifting through the archived images taken by the Hubble Space Telescope to analyze the visible-light observations it has made ten years apart.

Initially, astronomers believe that the supernova that left behind the gaseous corpse took place between 2000 to 1000 years ago.

Read Also: Uranus-Mars Conjunction 2021 Plus Moon: How to Spot the Majestic Cosmo Bodies in the Skies (Binoculars Needed)

Calculating Its Exact Age and Location

The team of NASA researchers, led by John Banovetz and Danny Milisavljevic from the Purdue University in West Lafayette, Indiana, studied 1E 0102.2-7219 to know its exact age and the location of the supernova, and by retracing the shrapnel from the blast.

In a report by The Next Web, the ejecta clumps or knots within the nebula are moving at different speeds and directions away from the center of the massive explosion.

The average velocity of the knots is 3.2 million kilometers per hour or around two million miles per hour, a speed so fast that it would only take 15 minutes for an object from Earth with the same speed to reach the Moon and back.

To determine the exact age of the supernova remnant, the team of scientists took the 22 fastest knots that can be seen from the nebula, then traced the movement of the knots backward until they all met at one point, which would then identify the exact spot where a star used to shine.

Once they have the location, the researchers were able to calculate how long it took the ejecta to reach their current points.

Hubble was also able to clock the speed of the crushed core of the star that caused the explosion, also known as the neutron star, that was ejected from the blast.

According to their estimate, the light from the explosion arrived on Earth 1,700 years ago, around the time of the decline of the Roman Empire, meaning it would have been visible to some people on Earth.

However, the researchers said that the supernova would have been visible to people living in the southern hemisphere, and unfortunately, there are no known records of the event.

"A prior study compared images taken years apart with two different cameras on Hubble, the Wide Field Planetary Camera 2 and the Advanced Camera for Surveys (ACS)," Milisavljevic said. "But our study compares data taken with the same camera, the ACS, making the comparison much more robust; the knots were much easier to track using the same instrument. It's a testament to the longevity of Hubble that we could do such a clean comparison of images taken 10 years apart."