NASA's 2020 released Roman Space Telescope is proving its superiority over the popular Hubble Space Telescope that has been around since 1995, with the new technology featuring 100 more ultra-deep field images. The new telescope has all the nooks and crannies that NASA needs for deeper space captures research, as it features better imaging compared to the present tech utilized.

"Out with the old, in with the new" is the best description for technology, as it replaces older models with the latest and most advanced devices that are yet introduced by engineers and innovators. While the National Aeronautics and Space Administration (NASA) has not announced anything about retiring the 26-year-old Hubble Space Telescope, there is surely something better in the agency's labs.

The Hubble has given several of mankind's best discoveries in the field of space and astronomy, also helping in understanding distant neighbors and other objects that are unknown and mysterious to astronomers that conducts studies. Hubble has indeed been one of the most powerful technologies in NASA's arsenal, making it one of the most capable to handle its researches. 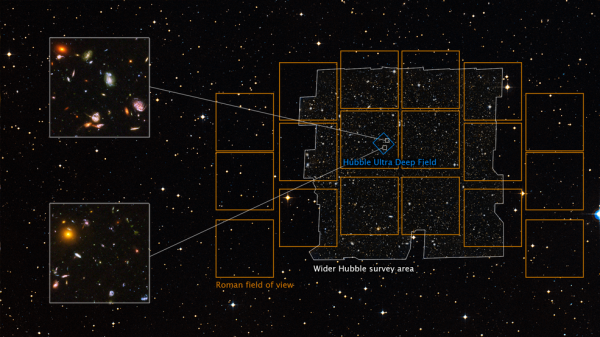 According to Sci Tech Daily, the Roman Space Telescope can picture and discover millions of galaxies and space forms present in outer space, with its process, despite appearing to be hidden in plain sight. Older technologies that could not detect several of the hidden discoveries would be picked up by the next-generation telescope and provide better understanding.

Potentially, the Roman Telescope would be able to picture almost a million discoveries including various galaxies, planets, stars, etc., which could be massive potential for new scientific discoveries and research to study. The impressive performance of the Roman Space Telescope truly improves and picks up where Hubble left and its capabilities almost 26 years ago.

NASA has introduced its latest telescope technology in 2020, called the "Nancy Grace Roman Space Telescope" that the company has initially called the "Mother of Hubble." The first chief astronomer of the space agency, Nancy Grace Roman, has led the company in various discoveries and developments in the field of astronomy and intergalactic studies.

The next-generation telescope was developed by NASA to provide better performance and imaging compared to older technology, and of course, the Hubble Space Telescope which was introduced in 1995. Of course, innovation is about improving and bettering one's technology, especially in areas where it lacks and needs more power or quality.

Related Article:  'Hot Jupiter': Strange 'Cloudless' Giant Gas Exoplanent Discovered As it Passed through a Star, Thanks to WASP