For a long time, NASA has been observing and studying the whereabouts of a red dwarf star called TRAPPIST-1. This star is where numerous earth-sized planets move around in a single solar system. As SlashGear reports, the TRAPPIST-1 is estimated to be about 40 light years away from the Earth. There are about seven plantes that revolve around this interesting star. Scientists have been amazed by the variety that these planets have. Just this week, a new study has been published showing findings that these planets have similar composition and density. 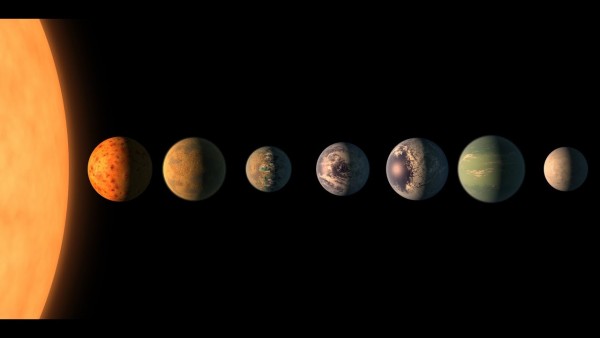 About the TRAPPIST-1 Seven Planets

The quest to discover the planets around TRAPPIST-1 started in 2016. Forbes notes that it has been performed by the NASA Transiting Planets and Planetesimals Small Telescope or TRAPPIST. Different observations were conducted and recorded using the retired Spitzer Space Telescope and ground-based telescopes. For years, scientist have been studying the external aspects of these planets. It is only until recently that the density of tehse planets have been studied.

TRAPPIST-1 Seven Planets Have Similar Composition, Far Different from that of Earth's

According to NASA, the similar density that these planets have, although varied in appearance, means that these planets likely have the same composition and ratio of materials such as silicon, iron, oxygen and magnesium. Moreover, these findings also suggest that the composition of these planets are different than the EArth's since these seven planets have eight percent less density as compared to that of the Earth. Thus, they might not have the same ratio and nature of materials.

Before its decommissioning mission in January 2020, Spitzer has been roaming around the system for over 1000 hours. NASA has utilized most of its tools using the Hubble and the Kepler in order to study the planetary system. As findings have been analyzed, they have concluded that the seven TRAPPIST-1 planets have indeed a very small variation of difference between each other, which amounts to as small as three percent.

The difference between those planets and Earth is about eight percent, said to be significant on a planetary scale. TRAPPIST-1 planets could have lower iron densities, with the study speculating a density of around 21 percent compared to 32 percent on Earth. The study also theorizes that the planets may not have solid iron cores. NASA admits the answer could be a combination of both scenarios, including some oxidized iron.

On a planetary scale, the difference is massive when compared with the planet Earth. The eight percent difference means that the TRAPPIST-1 planets may have lower iron densities. As the study finds, their iron density could be around 21 percent as compared to that of the Earth. Moreover, the study also finds that the planets could have solid iron cones. They also suggest that the plante smay contain some oxidized iron.

This discovery of difference is a great leap for astronomy, as it may mean that seven other planets could be either potentially more habitable or more dangerous than that of the Earth. More studies need to be conducted regarding the composition of these planets. As of now, experts ar starting with what they have to form hypothesis on these findings.