The two richest men in the world have reportedly crossed each other's paths with a recent satellite fleet feud. To make things worse, they are taking it over to the U.S regulators as the spike begins to be more serious. As reported by Bloomberg, SpaceX's CEO Elon Musk has asked for permission from the Federal Communications Commission to grant them access to operate at a lower orbit for Starlink communications. Initially, Starlink, a satellite internet constellation that provides internet for users all over the world operates at a higher orbit. Now, plans have changed as SpaceX finds it more efficient to change their real estate position in space. 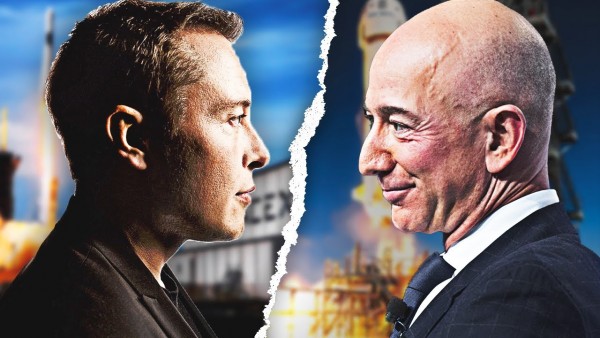 Jeff Bezos, Musk's greatest contender with the title "World's Richest Man" begs to disagree with SpaceX's decision. According to the Amazon CEO, SpaceX's new movement will risk interference and would increase the likelihood of collisions with Amazon's planned Kuiper satellites. Just like Starlink, Kuiper is a satellite designed to provide internet service from space for users.

Instead of just being in the confines of private rulings, the legal filings by big personalities and influential billionaires have reached the public view as the two have brought their sentiments to the most popular mind bubble portal by now, Twitter. The two have tweeted about the issue on one end from Amazon's official account, and on the other hand from Musk's personal account. The SpaceX owner is known to be very candid by personally using his Twitter account not only for professional use but also for entertainment such as by sharing quotes, memes, and late-night thoughts. The Twitter feud between the two has made it seem to the public as a fight between two big personalities racing in their quest to fulfill their sky dreams.

According to Amazon Inc.'s tweet, the move of SpaceX to employ new changes are meant to weaken the competition between satellite systems. Moreover, the company says that although the change may be of SpaceX's interest, it would not be a beneficial move to the public. See tweet below:

(2/3) Those changes not only create a more dangerous environment for collisions in space, but they also increase radio interference for customers. Despite what SpaceX posts on Twitter, it is SpaceX’s proposed changes that would hamstring competition among satellite systems.

(3/3) It is clearly in SpaceX’s interest to smother competition in the cradle if they can, but it is certainly not in the public’s interest.

As expected, Elon Musk has followed through with the tweet head-on. He (indirectly) answered the tweet by replying to a tweet featuring a coverage by CNBC journalist Michael Sheetz. Musk then answered by opposing the statement that suggests the move is detrimental to the public. Moreover, he highlighted that Kuiper itself is far ready for the public.

Read more: SpaceX's Starlink Study: Over 50% of Web Users in the US Ready to Switch to Elon Musk's Internet Satellite

As CNBC reports, so far, SpaceX or the Space Exploration Technologies Corp has already launched more than 1,000 satellites for its own internet service, Starlink. It has already been signing up with numerous customers in Canada, U.S, and U.K so far, even ahead of its launch. On the other hand, Amazon Inc. has gained FCC permission to allow 3,236 satellites for a fleet and is known to launch more in the future.

Amazon insisted that the FCC should reject the plan of SpaceX to move at lower orbits. Amazon highlighted that the move would put SpaceX satellites in collision with the Kuiper system orbits, and would thus not only be detrimental to the two but to the public. SpaceX seems to be firm and confident in saying that Amazon's plans are still nascent, and therefore the move would not impede public good in any way.

A lower orbit seems to be a place of competition for these big satellite providers seems a low altitude would mean quicker internet service. This is because the signal would not have to travel so far before reaching users from Earth. Moreover, SpaceX says that their proposed move would provide more benefits since it would lessen the risk of space debris since they would fall out from the orbit more swiftly as compared to that of a higher spacecraft

So far, SpaceX plans on operating at 12,000 satellites. It has since then garnered authorization from the FCC for 4,400 birds, which includes that of 1,584 at 550 kilometers where SpaceX's satellites currently reside. SpaceX is still awaiting its approval to move another 2,824 satellites at that same altitude, as opposed to the earlier proposed height which is twice as high. The public is still awaiting FCC's decision regarding the satellite feud.