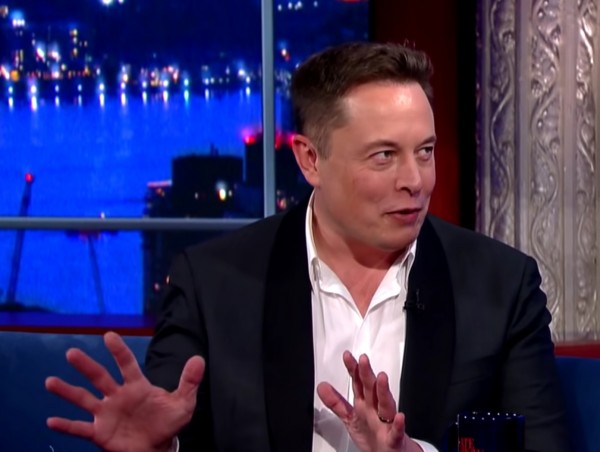 (Photo : Screenshot from YouTube/ The Late Show with Stephen Colbert)
Elon Musk commented on Twitter that the capabilities of AI is 'deeply underestimated.'

A post of a Twitter user about the FSD (Full-Self Driving) capability of Tesla sparked a debate among many people, and one of them is Tesla's CEO Elon Musk, who happened to stumble upon the post.

Musk took the discussion in a lighter context, but many people were immediately triggered by the post.

A Twitter user named Daniel Toloko said that he was curious about the next update regarding the research and development spending of a company he chose not to name. In addition, Toloko stated that he was not expecting anything from the 'unnamed' company.' It will only be possible if the said firm will seriously invest in their technology.

The last sentence in Toloko's statement suggested that this anonymous company has been overtaken already by Honda, a famous Japanese automobile manufacturer in terms of FSD.

The next thing that happened was when Whole Mars Catalog, another user, told the Tesla exec that Toloko's post is for those people who are misinformed on the subject.

"Tesla AI, both hardware & software, is deeply underestimated," Musk responded to Whole Mars Catalog. Several social media users have flocked in the thread and they shared their opinions regarding the controversial post.

One user said it was different the way Tesla does the FSD concept. The difference between Tesla and Honda is that the latter is used in advertising their products, so a vast population will be informed. Another user who has a 'dog' icon mentioned that what happens is some balance. He clarified that since a product is inferior, it needs to reach out to the people through ads.

The UX designed based on the Bay Area revealed that the public is undergoing misinformation when it comes to artificial intelligence. Enoch Wu, the commenter, admitted that he was not an expert in that field, but the online course he took helped him impose an assumption. He ended that it is common knowledge for those who have expertise in the business standpoint.

Several users found the main post hilarious, but some said that Toloko needs further review. Peter Bergius, an entrepreneur by profession, commented that people will only realize FSD when the feature will be made accessible to many. He specifically referred to the start of the service of Tesla's RoboTaxi.

According to a report by Teslarati, Tesla recently ran an FSD suite to see if it can catch up with the leading technology in the autonomous driving race, the Waymo of the Alphabet Inc. A test was conducted for the self-driving systems two times, and the results revealed a shocking conclusion.

Whole Mars Blog, the user a while ago, was able to test-drive Alphabet's Waymo. The owner of the Tesla Model 3 saw how the FSD software went on the experiment compared to the driverless taxi of Waymo. He also found out that the AI approach of Tesla's camera is close to Waymo, but it is deemed more efficient than Alphabet's autonomous driving approach.