ISS Ejects Its Largest Piece of Space Garbage Ever

NASA recently released a pallet packed with 2.9 tons of old batteries, making it the most massive load of space trash from the International Space Station (ISS) to date. 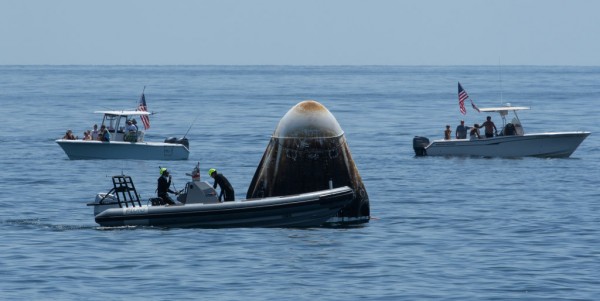 According to a report from Spaceflight Now, ISS astronauts had been conducting spacewalks to replace 48 aging nickel-hydrogen power packs with the more powerful lithium-ion power storage units.

They added that the space debris is safely moving away from the station and will orbit Earth between two and four years before burning up harmlessly in the atmosphere.

However, NASA spokesperson Leah Cheshier told Spaceflight Now that the space agency has no statistics on how many pieces of the debris might survive and re-enter the planet.

The Threat Of Space Debris

Majority of these space junk moves at the speed of 18,000 miles per hour - almost seven times faster than a bullet.

The space agency acknowledged the safety risk it poses to current and future space-based services, explorations, and operations due to its volume and rate of speed.

Futurism previously reported that more than 500,000 pieces of space junk are orbiting the planet, and around 20,000 of these are bigger than 10 centimeters.

Stuart Grey, a mechanical and aerospace engineering teaching fellow at Scotland's University of Strathclyde, said that over half of this debris had resulted from collisions.

Grey told Futurism that since these objects were made out of materials that are expensive to produce, it is understandably tempting to utilize them as renewable resources.

However, he explained that the main issue would be the effort needed to recapture and utilize them.

He added that building rockets for the sole purpose of catching such speedy debris would be too costly for the effort.

Meanwhile, scientists and engineers from the NASA Innovative Advanced Concepts (NIAC) Program suggested using a spacecraft thinner than human hair and wrap it around space debris like a net.

NIAC program executive Jason Derleth described the concept to Popular Science as a "giant piece of saran wrap covered with thrusters" that would wrap around space debris and pull it down into the atmosphere.

Named "Bane Crafts," the proposed spacecraft would be about three feet square and about 10 microns thick and would be made out of flexible plastic and powered by a thin layer of solar cells.

"Trying to catch something that's going that fast is really, really hard," Derleth told Popular Science. "Docking with a piece of debris means you have to match that orbit exactly."

Another group of researchers based in China, proposed using lasers to zap potentially dangerous space debris to either deflect it out of harm's way or force it to burn up in the atmosphere.