Bill Gates to Cover Earth With Chalk— Is It Dangerous? Here are Sun-Dimming's Important Details

Bill Gates will now continue the sun-dimming project of Harvard University's experts that he funded. This technique will use millions of tonnes of chalk, spraying them on Earth's stratosphere to block a certain amount of the sun's heat to cool off the planet. 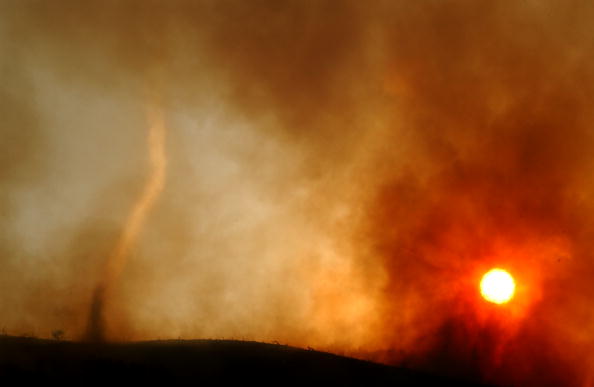 (Photo : Photo by David McNew/Getty Images)
A wildfire-induced tornado of hot ash dances across a ridgetop as the sun sets May 13, 2002 near Rancho Santa Margarita, CA. The fire consumed about 1,100 acres in less than six hours and seriously threatened 200 homes. Because the region is experiencing what may be the dryest season on record, native vegatation has a very low moisture content causing the official fire season to begin about six weeks earlier than usual. An extremely dangerous fire season is widely predicted for southern California this year.

However, analysts and other experts are worried that this method could lead to more severe weather systems. Entrepreneur reported that the sun-dimming project would launch a giant balloon from Sweden.

Scientists will send the balloon 12 miles above the Swedish town of Kiruna. Once it reaches its targeted-height, the balloon will drop 2kg of chalk powder into the stratosphere. Various sources and rumors claim that the first stage of the upcoming experiment will take place this June.

The Daily Mail UK reported that the Harvard University's gigantic balloon would lift 600kg of scientific tools. On the other hand, the chalk dust that it will spray into the stratosphere is expected to create a dust plume several kilometers in length.

(Photo : Photo by Alex Wong/Getty Images)
Bill Gates, co-chairman of the Bill & Melinda Gates Foundation, participates in a panel discussion during the Financial Inclusion Forum December 1, 2015 at the Treasury Department in Washington, DC. Department of the Treasury and the U.S. Agency for International Development (USAID) held the forum to discuss "ways to foster greater access to safe and affordable financial services for everyone."

However, the first part of the experiment is not expected to have any effect on the intensity of the sun's rays that are hitting the Earth since it'll only be 2kg.

Instead, this stage will help the involved scientists and researchers understand the chalk's effects and reactions with the air on Earth's stratosphere. When the experts acquire the data they needed, they will use computer models to determine what would happen if the chalk dust is carried out at a large scale.

This method will help them know if there really are serious negative effects once millions of tonnes of chalk are sent out.

Will sun-dimming be effective?

David Keith, one of Harvard University's applied physics and public policy professors, explained that the chalk dust could replenish Earth's ozone layer. This will happen once the particles react with the molecules that are destroying the ozone layer.

"Further research on this and similar methods could lead to reductions in risks and improved efficacy of solar geoengineering methods," said the Harvard professor.

If you want to know more details about the new sun-dimming project, all you need to do is click here.

For more news updates about other space activities, always keep your tabs open here at TechTimes.

Related Article: Elon Musk Starships to Land Before 2030, Mars Base Alpha Plans for Self-Sustanability-But Simulation Shows What He Is Missing!