An Apple first-generation iPad prototype was recently leaked on social media, showing that it has two charging slots on its body to sync with its USB or charge from any of the two sides of the tablet, said on Sunday, March 28. Ultimately, the prototype was trashed and the 1st-gen iPad known to the public has released with only one slot near its home button. 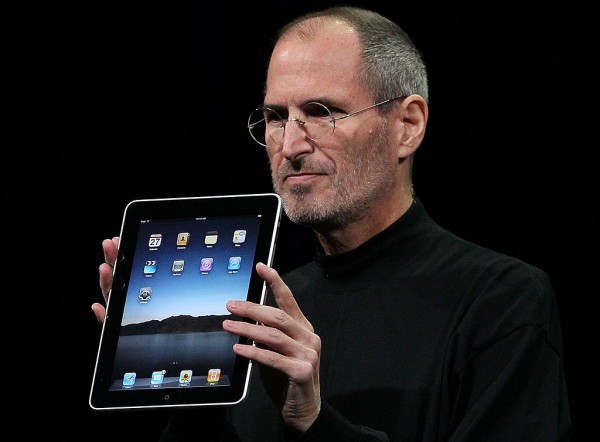 (Photo : (Photo by Justin Sullivan/Getty Images))
SAN FRANCISCO - JANUARY 27: Apple Inc. CEO Steve Jobs holds up the new iPad as he speaks during an Apple Special Event at Yerba Buena Center for the Arts January 27, 2010 in San Francisco, California. Apple introduced its latest creation, the iPad, a mobile tablet browsing device that is a cross between the iPhone and a MacBook laptop.

The first generation iPad was released by the company in 2010, but the public release only featured a single-docked tablet from Apple, with the public having no knowledge of the tablet's dual dock version until now. Giulio Zompetti, a leaker showcased the prototype photos via Twitter (@@1nsane_dev), showing an actual version of the tablet.

Here is a detailed view of both the hardware interfaces. #AppleCollection #Apple #iPad #prototype pic.twitter.com/CcWWAUPcz9

Here, Zompetti featured multi-angle shots of the iPad that has two docks on its body, which is different from what the public has known and got acquainted with, from Apple's lineup of the tablet. Currently, the iPad is 11 years in production, having four versions on its lineup with the iPad Classic, iPad Air, iPad Mini, and the iPad Pro.

According to Zompetti, the design never made it to Apple's DVT (design validation test) and was ultimately scrapped even before it undergone production from the Cupertino giant's factories. Initial prototypes of the dual-port iPad classic have surfaced before, and it was auctioned via eBay, as several design leaks were released.

iPad Has And Always Will Be Single-Docked

The iPad is a mainstay among Apple's list of devices since it was introduced in 2010, with the company showing no signs of discontinuing the tablet as it is one of its classic designs in their stores. Moreover, its design featured a single-dock platform that only has its charging and sync port in one slot, instead of the leaked prototype.

Currently, there is no way of knowing whether Apple would be bashed or praised with their dual dock design, especially if whether these features could support both charging and synching at both the docks. The computer synchronization to iTunes would already charge the tablet as it is connected, but would only feature a slow rate of charge.

The initial iterations of the iPad Classic have always been single-docked and are with the first charging method of Apple featuring the 30-pin and wide bored setup that was used until the iPad 3rd generation. The 30-pin was known for only allowing one side to connect on the tablet, without the capabilities of a "flip flop" entry like the Lightning cable.