Elon Musk has recently mentioned and released details about the long-awaited venture of Tesla to bring back a thing from the past, and that is the Tesla Supercharger Station with a 50s Diner theme and a Drive-In Theater. The location of this venture would be on Tesla Supercharger Santa Monica, and initially, it was turned into a Supercharger V3 Station by the company. 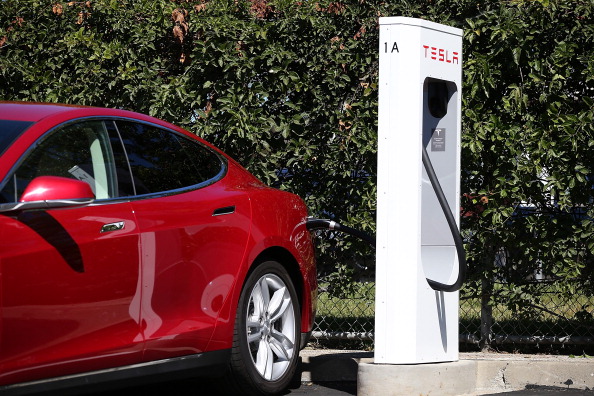 (Photo : Photo by Justin Sullivan/Getty Images)
FREMONT, CA - AUGUST 16: A Tesla Model S sedan is seen plugged into a new Tesla Supercharger outside of the Tesla Factory on August 16, 2013 in Fremont, California. Tesla Motors opened a new Supercharger station with four stalls for public use at their factory in Fremont, California. The Superchargers allow owners of the Tesla Model S to charge their vehicles in 20 to 30 minutes for free. There are now 18 charging stations in the U.S. with plans to open more in the near future.

The Tesla CEO then revealed that there would be over 100 movies playing in the theater, non-stop, to continue providing entertainment and food whilst recharging electric vehicles of the company. Musk has not revealed if it would be another V3 station, but he said that it would be a new Supercharger station that is coming to the city with retro themes.

Initially, the tweet refers to a fan or enthusiast that has posted the photo of a long line among Tesla Model Ys and Model 3s which have queued up in the original Supercharger Station in Santa Monica to replenish their batteries. The Santa Monica Supercharger Station is a major one and is known for its strategic placement on Highway 10 leading straight to Los Angeles.

According to Electrek's report, Tesla's original location near Highway 10 has been built towards a different venture, and it had focused on a Supercharger V3 Station in Santa Monica. Basing on Elon Musk's tweet, the new retro-themed 50s Diner and Drive-in Theater of a Supercharger would be a new one, on its location set by Tesla.

The former Supercharger station has already secured its needed permits to build the regular V3 station and has no information regarding the change it would make to be a different one. Musk suggested that it would be new, meaning that the company aims to secure a new lot to erect its 50s Diner Supercharger that would highly resemble the good old days.

Gonna put an old school drive-in, roller skates & rock restaurant at one of the new Tesla Supercharger locations in LA

However, the only things confirmed were the 50s Diner theme and the Drive-in theater, but the roller skate servers were not mentioned by the Tesla CEO in his tweet, compared to his original statement dating back to 2018. Here, the CEO was enthusiastic to share the venture that would pop up near LA, but fast forward to three years later, the world has yet seen its establishment.