SpaceX now seems to be fully ready for its Inspiration4 quest. This time, the line-up for the Dragon exploration has finally been concluded. In September, the four-man crew is expected to orbit the Earth through a spaceship.

The mission is expected to end after three days. Meanwhile, it is also the first all-civilian group that will be sent to revolve around the planet. Find out who the members of Dragon exploration are.

SpaceX's Four-Man Crew: Who Are They? 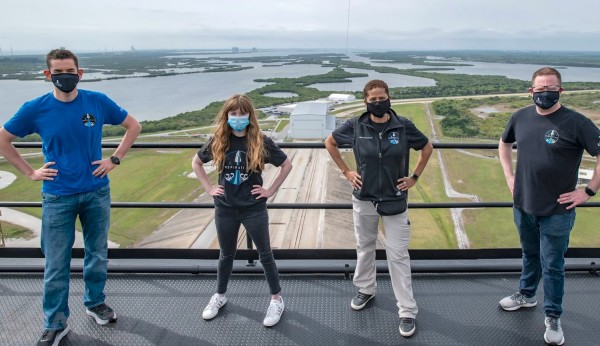 Business Insider reports on Sunday, Apr. 4, the last two persons included in the Inspiration4 mission were revealed. With that being said, the final crew was already settled for a memorable trip five months from now.

Furthermore, it is expected that the spaceship named Dragon, where the four-man crew will ride, will be released by the Falcon 9 rocket from Kennedy Space Center no earlier than Sept. 15.

For three days, the orbit mission will happen at an estimated altitude of 335 miles.

Before the announcement, Jared Isaacman and Hayley Arceneaux were the first members to be revealed. Dr. Sian Proctor and Chris Sembroski have already made their way for the prestigious space mission.

According to a report by Fox59, the group consists of a cancer survivor, a billionaire, an Air Force veteran, and an entrepreneur. The first-ever all-civilian space expedition is only getting started.

The commander of the Inspiration4 flight will be the billionaire businessman Isaacman, who also happens to be a pro jet pilot. Meanwhile, Proctor is also a trained pilot who also turns out to be an educator and an entrepreneur.

They are also joined with Arceneaux, a cancer survivor, during her childhood. Presently, she is an assistant at a hospital that cured her condition.

The last person to complete the line-up is Sembroski, who has experience controlling aircraft in his past Air Force journey. He now works at Lockheed Martin as an employee who specializes in the aerospace industry.

Read Also: Sphere-Shaped Probe DAEDALUS Looks Forward to Explore Lunar Caves, Which Are Not Yet Explored

What Do the Dragon SpaceShip Crew Members Symbolize?

The mission is not only intended for space exploration purposes since it will carry values like generosity, prosperity, leadership, and hope in the place of the civilians.

Moreover, the mission is headed towards a $200-million fund-raising activity for the St. Jude Children Research Hospital.

"It's an incredible honor to be part of the #inspiration4 mission and to represent cancer patients and survivors everywhere. And forever honoring those who have died of cancer, remembering our fight is not over," Arceneaux, who symbolizes Hope, said in her tweet on Mar. 6, Western Journal reported.

This was also in line with Arceneaux's dream of reaching space someday. When she was 9 years old, she hoped to become an astronaut after her family visited NASA.

Truly, these candidates come with different interests and professions, but what binds them together is their unified desire to reach the stars through Dragon.