Back in 2014, "Flappy Bird" was regarded as one of the most famous games until its original creator decided to remove it from the Google and Apple App Store. This 2021, we could expect another round of playing it not in the form of a game but the form of the macOS notification. 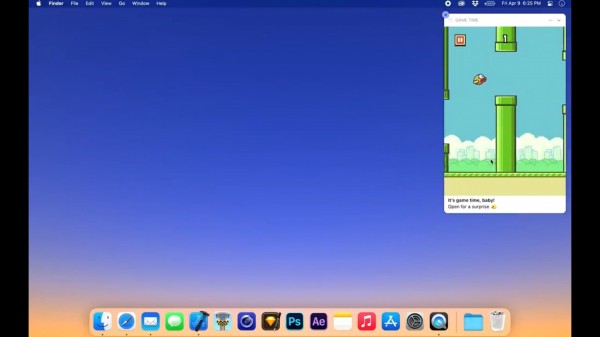 According to a report by MacRumors on Sunday, Apr. 11, Apple developer Neil Sardesai managed to put "Flappy Bird" as a playable version in the form of a push notification. It is made possible thanks to the macOS Big Sur update of the company.

While we cannot download "Flappy Bird" anymore since it is now absent in the app stores, the clone version of it will relive our memories playing it. Will Eastcott, the creator of PlayCanvas was able to compress its 28-KB file size to solve the issue of Apple's limitations in the user notification UI framework.

Other Games That Have Invaded Apple's Interfaces

Seeing "Flappy Bird" as a bit-size game on your side screen is another way to engage users to a nostalgic video game throwback. Of course, it was not the first game that served the purpose of being a push notification.

Sardesai has already put the playable "Pong" game as Mac dock's icon. Moreover, he also managed to stuff "Dino Runner," a popular browser game in Google Chrome in the menu bar of Mac. Before we could only play the "Dino" game without the internet but we could already access it through a different channel.

"Lately I've been trying to find fun ways to push the limits of various macOS APIs," Sardesai stated in an interview with Gizmodo.

When Sardesai reviewed Apple's documentation concerning the framework of user notification customization, the Apple designer said that the most recent version of the OS welcomes the use of "interactive control."

This opens an opportunity for the developers to conduct several tests which could explore the potential of switches and buttons. Furthermore, this pushed Sardesai to experiment with putting the game as a push notification of the system.

Did you know you can put a whole game inside of a push notification pic.twitter.com/LlMx2AjvHH

Last week, Sardesai posted on Twitter that the original "Flappy Bird" will appear when players click the screen. Although the players are reunited to the long-gone game, it appears that it is still hard to play like before.

In the future, Apple could potentially incorporate big games into its notifications. The interaction could be further enhanced thanks to the efforts of the developers who continuously ensure the satisfaction of their users through new software features.

'Doom' Could Be the Next Push Notification Game

Sardesai could be landing a new game soon for an interactive notification display. When he was questioned about the possibility of adding "Doom" to the macOS, he said that a "Doom" push notification would be an impressive addition because it's worth the try.

Related Article: How to Become an Apple iOS Beta Tester?