Bill and Melinda Gates Announce their Divorce Via Social Media, Says It Was a Mutual Decision—Look Back on the Power Couple of Tech

In what is supposed to be the "Pearl" wedding anniversary of Bill and Melinda Gates in three years (30th), the Microsoft co-founder and his wife have recently announced the decision to divorce their marriage. The announcement was made via the couple's Twitter accounts, with both having the same statement and image used to share the news.

And yes, the news revealed by the couple is official and a mutual decision that both have agreed upon, as revealed in the letter and not much has been disclosed regarding the reason behind the couple's separation. The Philanthropist couple of the world and technology industry have shared the devastating news to the public and it has garnered a lot of sorrowful regards from their fans.

Read Also: Bill Gates was Right? Here's Why Bitcoin Consumes Electricity Larger than Most Countries in the World

Bill and Melinda Gates in Microsoft 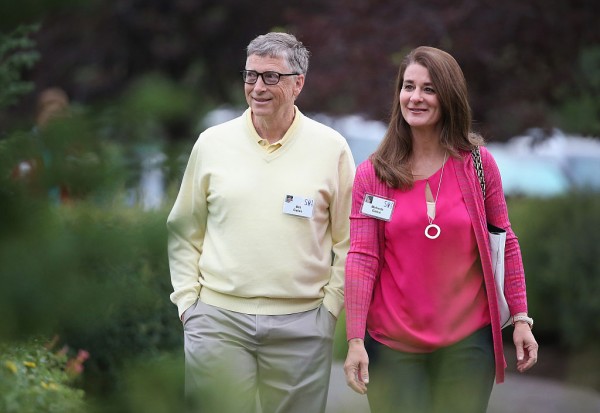 (Photo : Photo by Scott Olson/Getty Images)
SUN VALLEY, ID - JULY 11: Billionaire Bill Gates, chairman and founder of Microsoft Corp., and his wife Melinda attend the Allen & Company Sun Valley Conference on July 11, 2015 in Sun Valley, Idaho. Many of the worlds wealthiest and most powerful business people from media, finance, and technology attend the annual week-long conference which is in its 33rd year.

While Bill Gates and Paul Allen were the main proponents and founders of one of the largest software companies in the world, it was also known that Melinda French-Gates has also worked in the company. Her position here was a former general manager in the starting company, working alongside her future husband whom she married in 1994.

According to USA Today, Melinda French-Gates has worked for Microsoft and has developed multimedia products for the company, where she was hired in 1987 as a product manager. The couple's story went on after being seated next to each other in a business dinner which sparked the start of their relationship. The couple got married in Hawaii in 1994, and two years later, Melinda Gates left Microsoft.

In 2000, the couple started the Bill and Melinda Gates Foundation, which follows the philanthropic belief of the two which focuses on helping others and providing assistance the best they can. With this venture, both Bill and Melinda Gates have pledged to give their earnings from Microsoft and other ventures to charity, particularly to those who need it most.

The Bill and Melinda Gates Foundation has grown to be the largest private charitable foundation in 2015, and now holds the second spot next to Novo Nordisk Foundation which has endowed more than $70 billion in funds. The Gates Foundation has a total endowment of $49.8 billion, which is almost crossing the $50 billion thresholds.

Bill and Melinda Gates Through the Years

Bill and Melinda Gates have three children, namely Jennifer Katherine Gates (25), Rory John Gates (21), and Phoebe Adele Gates (18) which they raised with a modest philosophy of simple living, and God-fearing individuals. According to Inc, their children were raised on the 1970s philosophy of "Love and Logic," as dictated by 40 years of research model by a psychiatrist.

Through this, they have raised a family of individuals that is not looking into a lavish lifestyle and is all about giving back to the community and sharing their money with those in need. It was also reported that both Bill and Melinda Gates have only pledged $10 million to each of their children to inherit, and the rest of their money would proceed to charity.